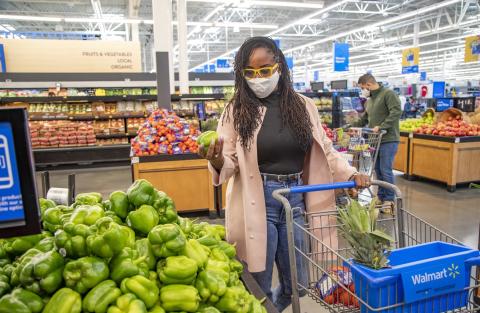 Increased traffic, larger transaction sizes and market share gains in grocery helped Walmart’s U.S. division achieve a 9.2% same store sales increase in its third quarter ended Oct. 31. The comp figure excludes fuel and is notable as it comes on top of a prior year increase of 6.4%. Total sales for the division increased 9.3% to $96.6 billion while operating profits appeared to reflect expense pressure and increased 5.9% to $4.86 billion.

Sales in food categories increased 10%, adding $10 billion in sale volume, and reflected the company’s strongest growth in six quarters. Walmart did not indicate the extent to which food price inflation aided its third quarter comps, but historically it has been among the last retailers to increase prices as it looks to maintain its status as a value leader.

“Our momentum continues with strong sales and profit growth globally. Our omnichannel focus is pushing digital penetration to record levels. We gained market share in grocery in the U.S., and more customers and members are returning to our stores and clubs around the world,” said Doug McMillon, president and CEO of Walmart. “Looking ahead, we have the people, the products, and the prices to deliver a great holiday season for our customers and members.”

Regarding the holiday, Walmart said it expects its U.S. same store sales to advance 6% and it increased its full year profit forecast to a roughly $6.40 from a prior range of $6.20 to $6.35.

An even more impressive showing was had by Sam’s Club where strength in new membership helped same store sales, excluding fuel, increase 13.9%. Total sales increased 19.7% to $18.9 billion while operating income increased 10.2% to $475 million. Membership and other income increased 37.9% to $1.3 billion.