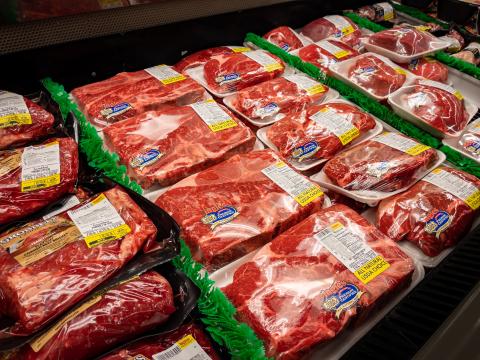 Sticker shock: The retail meat case is seeing some of the highest price hikes.

Already-rampant concerns about inflation are being further stoked with the release of new statistics from the U.S. Department of Labor showing that the problem was even worse than anticipated in October. The Labor Department reports that consumer inflation reached its highest point in more than 30 years.

Overall, the consumer price index (CPI) is up 6.2% over last year, higher than the 5.9% Wall Street consensus projection. Prices continued to creep across several consumer product sectors last month, including food, which ticked up 0.9% in October, the same increase as in September. On a year-over-year basis, food prices are 5.3% more than in October 2020, with food-at-home prices up 5.4% and food away-from-home prices rising 5.3%.

According to the latest CPI report, all six major grocery store food group indexes are on the rise. The protein market is experiencing some of the highest rates of inflation:  The categories of meat, poultry, fish and eggs collectively jumped 1.7% during October and are 11.9% higher than in October 2020. The index for beef is 20.1% higher than last year and the index for pork rose 14.1% in that same time period, its largest 12-month increase since December 1990.

The index for other food at home ticked up 1.2% in October, the largest monthly increase since April 2020. Cereals and bakery products climbed 1.0% last month, while nonalcoholic beverages edged 0.8% higher and dairy and related products crept up 0.2%.

The accompanying economic challenges of widespread labor shortages and supply chain disruptions are causing more headaches in the marketplace, even as government officials are seeking to ease worries about the multi-front issues. This week, Treasury Secretary Janet Yellen said that the Federal Reserve is carefully monitoring the situation and would step in to prevent 1970s-era spikes, but reiterated that she expects inflation to subside to more acceptable levels next year as the economy rebounds from the long pandemic.

“Target has kept our stores open and our supply chains running, while also investing significantly to keep our guests and team safe. And along the way, we’ve engaged with elected officials from both parties to provide our retail expertise and perspective on keeping the economy moving forward," the Minneapolis-based Target Corp. said in a statement.

Earlier, the Biden Administration issued a release on actions proposed in the new infrastructure bill that would alleviate port congestion and help free up the supply chain.