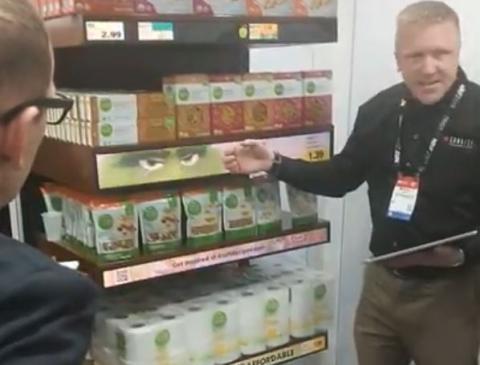 Though it's been a couple weeks since the finale of Retail's Big Show 2019, hosted by the Washington, D.C.-based National Retail Federation and held at the Jacob K. Javits Convention Center in New York, grocery technology folks who attended the event are still thinking about many of the most innovative solutions showcased on the show floor.

I know, for me, one of them was on display at Microsoft's booth: Kroger's new Retail as a Service (RaaS) solution, a suite of cutting-edge digital solutions powered by Microsoft Azure, Kroger's preferred cloud platform, that also can be adopted by other retailers.

Currently being tested at two of the top grocer's stores – one in the Cincinnati area and another near Seattle – the suite incorporates the latest generation of the EDGE (Enhanced Display for Grocery Environment) Shelf digital display system. The system eschews traditional paper tags, communicating everything from pricing and promotions to nutritional and dietary information digitally. And according to new research, shoppers are receiving it well, actually preferring it over traditional shelf tags.

I never even got right up in front of the shelf – I was lucky that my height allowed me to raise my phone high in the air, over the shoulders of all standing in front of me, to shoot a 17-second demo video. And boy, did that brief video's performance resemble the congestion at that booth: It blew up more than any other post I've made on LinkedIn, to my surprise, grabbing hundreds of likes and tens of thousands of viewings (defined as watching three or more seconds of the video).

But alas, I didn't have the chance to stop in and ask a few questions – despite my efforts, the booth was incredibly crowded. However, I was happy to read a rapid-fire Q&A with Kroger this morning from Patrycja Malinowska, associate director of content for P2PI.org, website of our sister brand The Path to Purchase Institute.

Check out her interview here at our sister brand, Consumer Goods Technology.