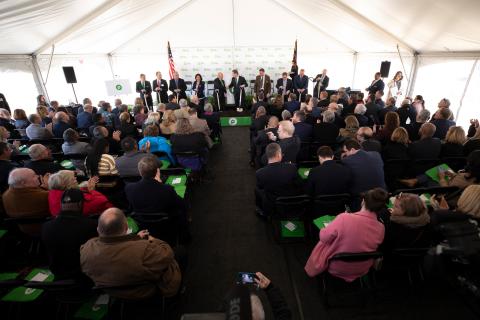 Publix Super Markets has started construction on a refrigerated distribution center in Greensboro, N.C., that will deliver to Publix locations in the Carolinas and Virginia. The 940,000-square-foot facility is expected to be completed by the end of 2022 and to cost $400 million.

“The Greensboro distribution center will play a key role in supporting our growth in the region,” said Publix CEO Todd Jones. “The hundreds of new associates who join the Publix family will help us provide the premier service our customers have come to expect.”

The facility will add up to 1,000 jobs to the area by 2025. Jones was on hand at a Feb. 27 groundbreaking ceremony, along with North Carolina Gov. Roy Cooper and House Speaker Tim Moore, and Greensboro Mayor Nancy Vaughan.

The distribution center is a long time coming, having been announced in 2018 and then put on hold because of a water protection variance. This issue was resolved in July. The facility is Publix's 10th distribution center and its first in North Carolina.

Lakeland, Fla.-based Publix operates more than 1,200 grocery stores in seven southeastern states. The company is No. 5 on Progressive Grocer’s 2019 Super 50 list of the top grocers in the United States.