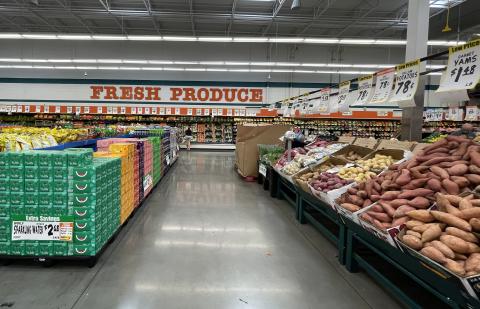 Whether due to supply chain issues or simply negative impressions, 60% of consumers think the shelf life of fresh food has decreased.

Frozen food is gaining in popularity as consumers balk at higher prices for perishables and say fresh food on store shelves isn't as fresh as it used to be.

According to Deloitte's third annual report on the future of fresh food, frozen is gaining an advantage in the food fight to capture growth in at-home consumption. The report, titled "Fresh vs. Frozen: The Future of Fresh in a Changing Competitive Landscape," describes how consumer behaviors and preferences have shifted amid the larger health, social and economic context, and how food suppliers and retailers can lean into these changes to create new opportunities.

While consumers feel less anxiety about in-store shopping (40% say shopping is more stressful, compared to 54% in 2020), pandemic-influenced shopping habits continue to endure and impact food purchases. And, while fresh food sales are up, frozen is gaining a greater share of the growth. Three factors are driving changes across both categories – perishability, price and preference.

"Fresh food sales are holding up much better than was expected at the beginning of the year," said Barb Renner, vice chairman, Deloitte LLP, and U.S. consumer products leader. "But even in times of great success, companies should look out for where competition may come next. The industry needs to work out its supply chain issues and reenergize the fresh experience. Suppliers and retailers should also consider leaning into the opportunity in frozen by expanding their product offerings and reimagining the frozen aisle to create excitement and even more growth. Nailing e-commerce and the overall omni-channel approach will be critical as well for future success."

Whether due to supply chain issues or simply negative impressions, 60% of consumers think the shelf life of fresh food has decreased. Since they still aren't shopping quite as frequently for fresh food as they did pre-pandemic (the frequent shopper group is down eight percentage points relative to 2019), it is hard for consumers to depend on their fresh purchases not spoiling before the next shopping trip.

Ninety percent of consumers say price is the most important purchase driver for fresh food. With inflation driving prices up, cheaper frozen food is looking better by comparison. In addition, 82% of consumers believe fresh food prices have increased more than justified.

In head-to-head comparisons, 40-50% of consumers say that frozen food is just as good or better than fresh. This preference is even greater among younger consumers. For example, 57% of 18- to 34-year-olds believe frozen vegetables are just as good or better than fresh, compared to 39% of those 55 and older. More than half (51%) of 18- to 34-year-olds feel the same about frozen meat, compared to only 29% of those 55 and older.

Consumers are thinking about fresh food perishability at the store and at home. Nearly three-quarters (72%) of consumers think about how much food they throw away when making a purchase decision, and nearly half of consumers (45%) indicate that more of the fresh food in their home goes to waste than it did in the past.

Worries about food waste may be taking precedence over packaging waste. Six in 10 consumers prefer their fresh food be in packaging, and the same amount believe fresh food in packaging stays fresh longer.

Perhaps related, only 8% of respondents believe consumers as a group bear the most responsibility for the environmental sustainability of food; they believe farmers, ranchers and fisherman are most responsible (26%). Sustainability as a fresh food purchase driver dropped 10 percentage points in the survey from 2019 levels.

Last year, Deloitte identified two new consumer profiles that showed up prominently in the analysis of pandemic period survey data: the "Contemporary Consumer" and the "Conventional Consumer." Renewed analysis on 2021 data confirm these two profiles still exist. The Contemporary Consumer group, which values fresh food the most, grew by eight percentage points to now constitute 48% of the survey group.

Plant-based alternatives (PBA), sold in both the fresh and frozen aisles, represent a new challenge to traditional offerings in both categories.

Half of the consumers surveyed have purchased a PBA, and overall consumer interest in PBAs has increased six percentage points since 2020. Among those who have tried PBAs, nearly three in four (72%) say that taste has dramatically improved in recent years. These consumers feel that PBA milk and meat are just as good or better at 65% and 59% respectively, followed by cheese (54%) and seafood (51%). Overall, 32% of consumers would pay a premium for PBAs, but this number grows to 55% for the half of consumers who have actually tried it. However, this is still significantly lower than the 70% of all consumers who would pay a premium for fresh food.

While taste appears to be the most important purchase driver for PBAs (72%), consumers also value the perceived environmental (70%), health (68%) and animal welfare benefits (65%).

Deloitte's report is based on a survey conducted in July 2021 of 2,000 U.S. adults (aged 18 to 70) who influenced fresh food purchases in their households.