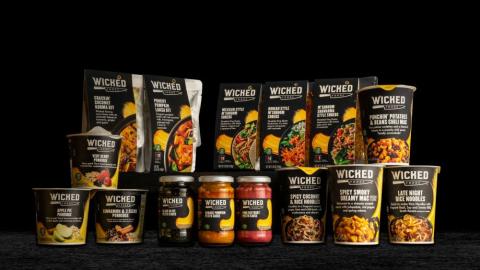 Get ready for a British plant-based invasion. U.K. plant-based food brand Wicked Kitchen has completed a $14 million Series A funding round that will help the company bring its flavor-forward vegan products to the United States.

“This funding supports the next giant leap in growth and adoption of the Wicked Kitchen product line — a journey that will span the globe,” said Wicked Foods CEO Pete Speranza. “As was demonstrated by Tesco, the U.K.’s largest supermarket chain, the breadth of offerings Wicked Kitchen brings to market allows motivated regional retail partners to commit to multi cross-category adoption. What Wicked brings into the U.S. will be unlike anything else that has come before it in the plant-based space.”

Americans are keen to incorporate more plants into their diet. According to the Plant Based Foods Association and The Good Food Institute, U.S. retail sales of plant-based foods continued to climb by double digits last year, increasing 27% to $7 billion. This growth was consistent across the country, with more than 25% growth in every U.S. census region.

“The fastest adoption of plant-based foods is always driven by great culinary experience,” said Chris Kerr, founding partner of New York-based Unovis. “Wicked Kitchen has an unparalleled range of exceptional products, a revered brand, and two founding chefs willing to stir the pot. Unovis is here to support this effort from every angle.”

The Sarno brothers are also co-founders of Gathered Foods, makers of the Good Catch plant-based seafood line. In addition, they wrote "The Wicked Healthy Cookbook" and are co-authors of "The Whole Foods Cookbook."

Another global plant-based company, Future Farm, recently revealed its own strategic plan to break into the U.S. market. The plant-based meat company, headed by Alexandre Ruberti, former head of Red Bull North America, revealed its plan on the heels of successful launches in 23 countries in Europe, Latin America and Asia Pacific over the past two years.