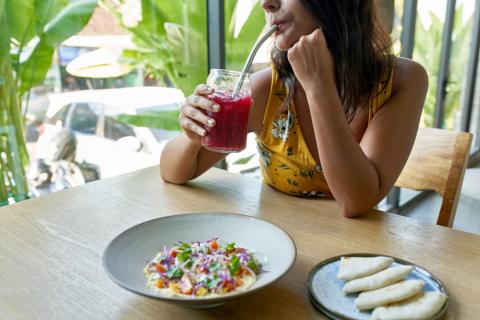 PlantX Life Inc. recently celebrated the official opening of its XMarket Uptown on July 31 in Chicago. The plant-based retail location is the company's second store in the United States and sixth store globally.

Known for its e-commerce platform that serves as a one-stop shop for plant-based products, PlantX is moving into the physical retail world in a bid to educate consumers, make the plant-based lifestyle even more accessible, and collaborate with brands in the space on sampling sessions or educational activations.

Located at 804 West Montrose Avenue in the Uptown residential neighborhood, the newest XMarket store debuted with a flurry of festivities, including booths and sampling stations from plant-based brands such as Dreampops, Kitchen 17, Good2Go Veggie and Up-N-Down Burger.

Delving into this increasingly popular sector, FMI – The Food Industry Association recently released its first-ever “Power of Plant-Based Foods and Beverages 2022” report. The study found that nearly half (42%) of shoppers put either a lot or some effort into choosing plant-based foods or beverages. The research also showed that curiosity is a key characteristic of shopper experimentation.

"Our carefully designed XMarket concept brings the vegan lifestyle directly to consumers in Chicago to taste, explore and understand the plant-based lifestyle," noted Lorne Rapkin, CEO of Vancouver, British Columbia-based PlantX. "XMarket is a vegan bodega, featuring a highly curated selection of the best vegan products available from around the world as well as nearby. Our goal is to make the plant-based lifestyle accessible. Our grand-opening party in Chicago was an overwhelming success. We plan to leverage the success of live events by hosting weekly events at the store."

XMarket Uptown has weekly events scheduled through the end of 2022.

According to the company, the 6,000-square-foot Uptown store "is believed to be the largest vegan grocery store in the world."

In addition to its product offering that includes more than 5,000 plant-based items and a delivery meal service. PlantX has plans underway to expand its product lines to include a juice and coffee company.

Meanwhile, in the United States, PlantX became a seller on the Walmart Marketplace last year. More than 500 plant-based grocery products are available on the site, including items from brands such as Oatly, Nature’s Path, Made in Nature and Simply Organic.