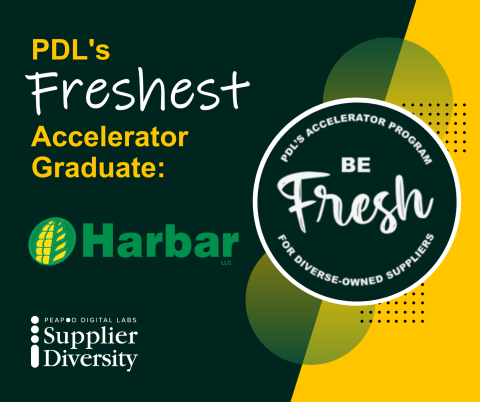 Peapod Digital Labs, the digital, e-commerce and commercial engine for the brands of Ahold Delhaize USA, awarded 11 diverse-owned suppliers that took part in its first accelerator program with $10,000 stipends to support their further business development and growth. Additionally, Peapod Digital Labs and leaders at other Ahold Delhaize USA companies chose Harbar, a National Minority Supplier Development Council-certified, Hispanic-owned business, as the participating supplier with the freshest perspective and awarded it an enhanced stipend of $20,000.

“We are humbled by this recognition of the Harbar team’s dedication over the years and a validation of our tireless focus on improving quality, service, innovation and value to the consumer,” said Ezequiel “Cheque” Montemayor, CEO of Canton, Mass.-based Harbar, which manufactures tortillas under the Maria and Ricardo’s and Mayan Farm retail brands, and the Wrappy foodservice brand. “Since we started working with Peapod Digital Labs’ supplier diversity program, it’s been a great journey. I’ve participated in a couple of other programs – nowhere in the dimension of this. It has been an honor to share this journey of learning, connection and inspiration with our fellow peer suppliers, and we look forward to having us embrace with ‘freshness’ this new opportunity.”

The accelerator ended with an event at which Ahold Delhaize USA CEO Kevin Holt revealed the “freshest perspective” award and the stipends for participants. Harbar received the honor based on the excellence of products; its strong focus on quality, innovative ideas; its efforts to keep up with new health-focused dietary trends; its commitment to local; and its passion for meeting consumer needs.

“Through the Accelerator, each of the suppliers were given a concentrated look at each Ahold Delhaize USA company through educational sessions, as well as discussions with various subject matter experts, including human resources, marketing, e-commerce and supply chain,” explained Natalie Dupill, commercial strategy lead for Chicago-based Peapod Digital Labs. “Through the program, we aimed to empower these suppliers to further grow their businesses, as well as move the needle on the presence of products from diverse-owned suppliers throughout Ahold Delhaize USA companies’ stores, offices and supply chain.”

Peapod Digital Labs is the digital, e-commerce and commercial engine of Ahold Delhaize USA, serving as the innovation lab for Food Lion, Giant Food, The Giant Co., Hannaford, and Stop & Shop. Ahold Delhaize USA, a division of Zaandam, Netherlands-based Ahold Delhaize, operates more than 2,000 stores across 23 states and is No. 10 on The PG 100, Progressive Grocer’s 2021 list of the top food and consumables retailers in the United States.