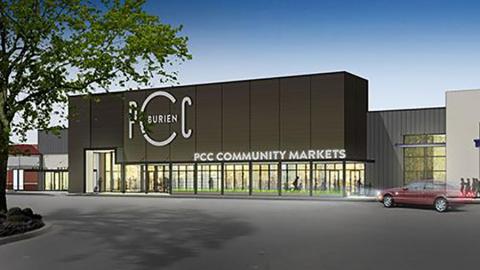 In September 2018, PCC placed a moratorium on selling Pacific Northwest-sourced Chinook salmon. Subsequently, the cooperative grocer received input from treaty tribes and marine conservation and fishery experts, leading it to conclude that the moratorium could be adjusted to better achieve its goal of protecting Southern Residents.

“PCC understood the moratorium was an initial step in working to address the problems facing the Salish Sea Southern Resident Killer Whales,” said Brenna Davis, VP of social and environmental responsibility of Seattle-based PCC. “It enabled us to work with the National Fisheries Conservation Center to develop a more robust, science-based standard, which balances complex conservation issues with our commitment to supporting local producers. The partnership also strengthened our resolve to advocate for policies that address two major issues facing the Southern Residents — protecting Chinook habitat and addressing climate change.”

To develop the standard, PCC’s team looked at fishery data and studies, and spoke with various stakeholders. The resulting standard focuses on the fisheries where the Chinook is caught and requires strong evidence that the fisheries avoid reducing prey supply for Southern Residents. Under the PCC Chinook Sourcing Standard, fisheries will receive rating of A, B or C (with A being the best) based on the answers to three key criteria questions: Does the fishery intercept the Southern Residents’ main source of food? Does sourcing from the fishery (or hatcheries that support it) deplete Chinook stocks? Are risks of prey interception and stock depletion understood well enough to be reliably evaluated and managed?

PCC will stock only Chinook salmon from fisheries that receive an A in the prey interception risk category and an A or B in the stock and knowledge risk categories.

“This standard is by no means the final word,” said Brad Warren, executive director of NFCC, also based in Seattle. “It is a measure that offers a ‘no-harm’ choice to concerned consumers while we all roll up our sleeves to tackle the systemic forces — like habitat degradation, pollution and climate change — that are increasingly important drivers of decline for Chinook salmon and the Southern Residents that depend on them.”

PCC will continue working with the center to evaluate fisheries and develop a wider-scope initiative for other retailers to address additional categories. The co-op will keep introducing efforts to protect the Salish Sea, among them establishing partnerships with Salmon-Safe certified farms, donating sales proceeds of certain items to conservation groups, providing financial support for organizations working to protect marine ecosystems, working to advance the organic supply chain to keep pesticides and other toxins out of streams; and advocating an end to net-pen fish farms.

The co-op is also continuing to support local fishers by selling other species of Pacific Northwest salmon, and its fresh and frozen raw seafood is responsibly sourced in accordance with the Monterey Bay Aquarium Seafood Watch program.

With an active membership of a little more than 80,000 households, PCC operates 15 stores in the Puget Sound area, including the cities of Bellevue, Bothell, Burien, Edmonds, Issaquah, Kirkland, Redmond and Seattle.