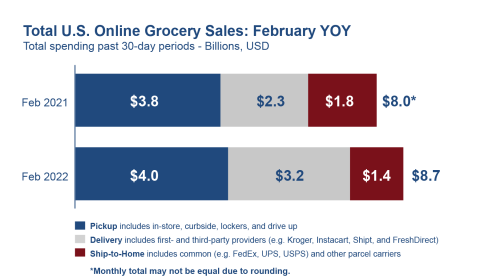 American consumers are still getting their clicks from online grocery shopping.

According to the latest Brick Meets Click/Mercatus Grocery Shopping Survey, the total U.S. online grocery market generated $8.7 billion in sales during February, a gain of 8.5% compared to the same period a year ago.

Pickup, the largest segment of e-grocery, grew 6% versus a year ago, generated $4 billion in sales, and accounted for 47% of the total sales during the month. Delivery reported a year-over-year gain of 37%, which equated to $3.2 billion, capturing 37% share of e-grocery spending. Ship-to-home, which was the largest segment pre-COVID with over 40% of spending, is now the smallest with just 16%; it finished with $1.4 billion in sales, down 24% year-over-year.

During February, shopper interest in online grocery shopping remained strong as over 68 million households bought groceries from a wide variety of providers and retail channels, which was nearly 11% higher than last year’s monthly active user (MAU) base. All three segments, pickup, delivery and ship-to-home reported double-digit gains in their respective MAU bases with delivery reporting the largest year-over-year gain at approximately 28%.

Overall spending per order, also known as average order value (AOV), softened in February, declining in aggregate by more than 2% year over year. Given the recent and significant uptick in price inflation, this suggests a reduced number of items in the basket. Ship-to-home was the main contributor to the overall spending decline; its AOV fell more than 25% to under $40 in February 2022, while pickup’s AOV declined by less than 4% and delivery’s AOV grew by 12%.

February’s order frequency was up 3% versus a year ago as MAUs completed 2.73 orders during the month, driven by increased usage of both pickup and delivery while ship-to-home decreased by mid-single digits. The increased order frequency, however, was not evenly distributed across market types. Only in the large metro markets did MAUs complete marginally more orders this year versus last; the three smaller metro market types reported mid- to upper-single digit declines.

The share of grocery’s MAU base that cross-shopped online with Mass during the month increased 1.3 percentage points versus last year and finished at almost 26% for February 2022. The likelihood for an online grocery shopper to use the same service again within the next month came in at over 62% for the month, climbing by more than four percentage points on a year-over-year basis. And, for the second time in the last several months, grocery’s specific repeat intent rate overtook the Mass repeat intent rate.

"Today, customer expectations for online grocery shopping are different than they were even a year ago, not to mention before COVID," according to Sylvain Perrier, president and CEO, Mercatus. "To grow their online share of wallet going forward, conventional grocers need to find ways to better satisfy those changing expectations. Inflationary pressures suggest retailers should look at optimizing online meal planning, showcasing store brands, and encouraging repeat customers to take advantage of online loyalty discounts."

The three receiving methods for online grocery orders are defined as follows:

Results were adjusted based on internet usage among U.S. adults to account for the non-response bias associated with online surveys. Responses are geographically representative of the U.S. and weighted by age to reflect the national population of adults, 18 years and older, according to the U.S. Census Bureau.