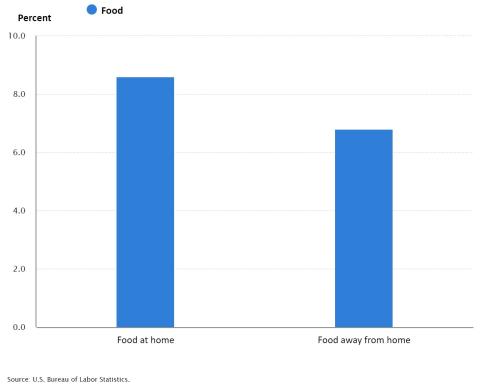 Any optimism about a possible slowing of inflation in early 2022 ran into harsh reality, as converging economic and geopolitical circumstances led to yet another jump in prices last month. According to the latest report from the U.S. Bureau of Labor Statistics (BLS), the Consumer Price Index (CPI) for all items rose 0.8% in February, making it a 7.9% hike on a 12-month basis for largest increase in nearly 40 years.

The overall rate was led by steadily-climbing prices in food, shelter and gasoline during a month when Russia launched its invasion of Ukraine and upended global markets. The early trickle-down effect of the conflict, along with already-intense price pressures, spurred a 1.4% leap in the CPI for food at home. The cost of groceries is now up 8.6% from a year ago.

The food-at-home uptick was the highest since April 2020. That’s notable, given the fact that April 2020 was a pinnacle of food consumed at home during the early COVID-19 shutdowns across the country.

Higher prices were seen across the board, as BLS data showed that all six major grocery food group indexes posted gains last month. The CPI for fresh fruits and vegetables rose the most, at 2.3%. Dairy and related products were up 1.9%, while the CPI for meats, poultry, fish and eggs edged 1.2% higher and cereals and bakery products rose 1.1%. Nonalcoholic beverage prices jumped 1.6% for the month.

Weighing in on the latest statistics, economists say that relief, at least in the short term with so much uncertainty, is not on the horizon. “Inflation is not likely to roll over and begin to come down for several more months,” said Michael Gapen, chief U.S. economist at Barclays Plc, during an appearance on Bloomberg Television. “This sets the stage for where we are now. And we need to see how long this conflict plays out and how disruptive the sanctions regime actually is.”

Meanwhile, Matt Pavich, senior director of retail innovation at Revionics, a provider of AI-powered price optimization solutions, underscored the effect on retailers that are in their third year of disruption. “The additional price hike reported by the U.S. Bureau of Labor Statistics for February is no surprise at this point, but it doesn't make it any easier on retailers tasked with accounting for thinning margins and extremely price-conscious shoppers," he said. “Retailers’ response to inflation – as surprising as it may sound – needs to include a combination of both price increases and decreases. For products that are very important to consumers, retailers in some cases can actually decrease prices for those key items, while taking price increases on less elastic products in other areas of the assortment.”