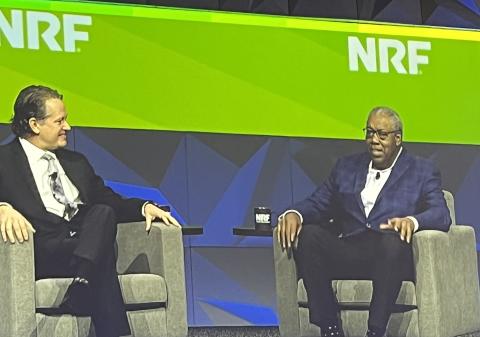 The 2023 NRF Show – a.k.a. Retail’s Big Show – began with a bang on Sunday, Jan. 15 on a blustery day in New York City with a supercharged keynote session by Walmart U.S. President and CEO John Furner, who also serves on the National Retail Federation’s board of directors.

In his brief introductory remarks, Furner reminded the packed auditorium of attendees that even amid such macro-challenges as a pandemic, supply chain and labor issues, inflation and war, retailers must “move fast to meet customers’ changing needs.” Sharing a quote that he noted had stuck with him – “Loyalty in retail is the absence of something better” – he emphasized the importance of keeping pace with consumer demands to retain and grow that loyalty. Furner also highlighted policy wins for the industry, such as averting the potentially crippling rail strike,” and predicted that retail, which saw sales growth of 6%-8% growth, on top of 14% growth in 2021, would remain dynamic.

Furner then introduced a guest to the stage for “a very special episode” of his ongoing biweekly podcast “The Huddle,” where he speaks with business leaders connected with Walmart. This episode’s guest was Dr. James Cash, an emeritus professor of business administration at Harvard Business School who is also a Walmart board member and a co-owner of the Boston Celtics. Beyond his business achievements, Cash is also a pioneer in the world of sports: In 1965, he was the first Black scholarship athlete in the Southwest Conference at Texas Christian University. Noting that his participation as a basketball player at that time required police protection, Cash marveled that his old college had recently erected an on-campus statue in his honor.

In speaking about his past, he credited his parents with fostering his determination to succeed, despite growing up in the Jim Crow South. His mother, a graduate of the famed Tuskegee Institute, used to say, “If the elevator’s broke, take the stairs,” encouraging him not to let anything stand in his way. Furner provided a quote of Cash’s – “Progress is, in many cases, better than perfection,” to which Cash responded that “change can happen quickly, if we persist.”

He then advised attendees and podcast listeners not only to “figure out what you’re good at, and then be great at it,” but also to have the courage to take on jobs others think are difficult. A man of faith, Cash paraphrased Scripture verses that he lives by (Romans 5:1-5), “You should celebrate in the middle of tribulations,” to impart the idea that the challenges we confront are preparation for something more significant in the future and can actually move us to a better place.

Cash also asserted that retailers need to be culturally sensitive and that inclusivity is important, with retail “no better sphere” for adopting such practices.

When asked by Furner what the “new normal” in retail is, Cash took the view that it’s actually the “old normal”: Consumers still want the most cost-effective products, easier access, better choice and personalization. While he pointed out that technology can help with the last of these things, this writer adds that there are also tech solutions available for the other items on the list. 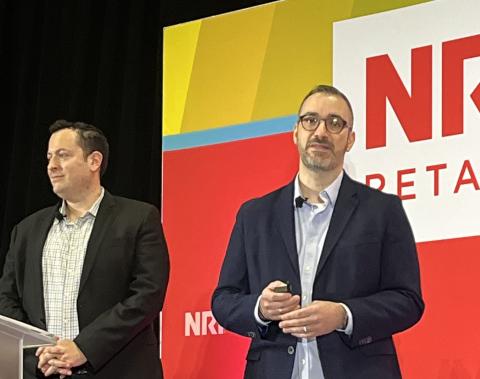 Gabay stressed that Trigo, the first company to convert fully operational supermarkets to frictionless checkout, offered easy, affordable overnight installation. At retrofitted stores, customers can enter, take items from shelves and leave without having to pay. Shoppers then receive a receipt via mobile phone in “half a minute,” according to Gabay. Trigo has global reach, having already converted stores for Tesco in London; Aldi in Utrecht, the Netherlands; and Netto in Munich, but now it’s working with a significant U.S. retailer. This coincides with Trigo’s move from being able to automate stores measuring 10,000 to 20, 000 square feet to as much as 40,000 square feet in the coming year.

McWeeney revealed that Wakefern and Trigo were testing the automated-store concept at a café on Wakerfern’s corporate campus, enabling associates to try out the system for themselves. He went on to tease that there was another location in the pipeline, but merely advised the audience to “stay tuned” for further details.

Meanwhile, on the show floor, there were inventive solutions from such vendors as Everseen (visual AI), AutoStore (robotic fulfillment), Qualcomm (Internet of Things), Blue Yonder (warehouse and labor management), Grabango (checkout-free shopping), SAP (business process management), Invafresh (predictive analytics in the perimeter and beyond), and SmartSense (sensing as a service).

Thus, in its first few hours, The 2023 NRF Show was able to deliver both inspiration and innovation for enthusiastic attendees.