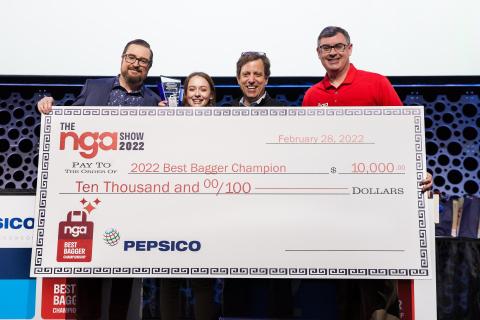 At the NGA Show, Alexa Sobsey (second from right), of Nugget Markets, was crowned the 2022 Best Bagger Champion.

The National Grocers Association (NGA), the trade association representing the independent grocery industry, revealed during the organization’s annual convention, the NGA Show, its 2022 board of directors and executive committee members. Nine people, by recommendation of the NGA board nominating committee and subsequent vote by the membership, and one appointed person will serve with the re-elected board members.

“I’m grateful to our board of directors who have volunteered countless hours to serve our association, particularly as we continue to navigate challenges brought on by the pandemic and return to a new normal,” said Greg Ferrara, president and CEO of Washington, D.C.-based NGA. “As we kick off a year-long celebration of NGA’s 40th anniversary, I look forward to working with the board of directors to help the organization enhance resources for our members and strengthen the independent supermarket industry.”

The NGA Show runs through March 1 in Las Vegas at the Caesars Forum Convention Center.