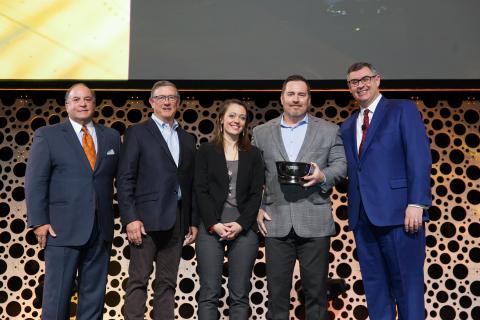 The National Grocers Association (NGA), the trade association representing the independent grocery industry, presented Stillwater, Minn.-based Cub Foods with this year’s Peter J. Larkin Community Service Award at the Opening Session of the 2022 NGA Show on Sunday, Feb. 27, at the Caesars Forum Convention Center, in Las Vegas. Cub Foods and its pharmacy team were honored for their efforts to provide COVID-19 vaccinations in Minnesota.

“The Cub Foods pharmacy team truly exemplified what this award is about by going the extra mile, including donating their personal time, to take care of their local community by helping ensure vaccines got into the arms of the local community, the elderly and first responders,” noted Greg Ferrara, president and CEO of Washington, D.C.-based NGA. “The commitment of their team members, who were on the ground in the stores to go the extra mile for their community, really resonated with the award review committee and reinforced the important role independent grocers play in their communities.”

Team members also used their personal time to administer vaccines outside of the pharmacy at such locations as long-term care homes and senior housing. They rallied to get a National Guard unit vaccinated in one day to ensure that the unit was able to take care of its duties for deployment. Cub continues to organize vaccination events and clinics.

Cub’s delegation to the NGA Show, led by Director of Pharmacy Aaron Sapp and Manager of Clinical Services Erin Suomala, accepted the award.

The creation of the award, named in honor of NGA’s former president and CEO and sponsored by Kimberly-Clark, was revealed during the 2019 NGA Show as a way to recognize an independent retailer or wholesaler company for their unique and strong service to the community over the previous year.

Also at the awards ceremony, Denny Belcastro, VP of industry affairs and customer development at Irving, Texas-based Kimberly-Clark, said that the company would continue to partner with NGA member retailers to donate diapers for needy families to the National Diaper Bank Network, which was established by Kimberly-Clark’s Huggies brand in 2011. Since that time, the network has contributed more than 250 million diapers, and the network has grown to 200-plus banks across the country, serving 200,000 children each month.