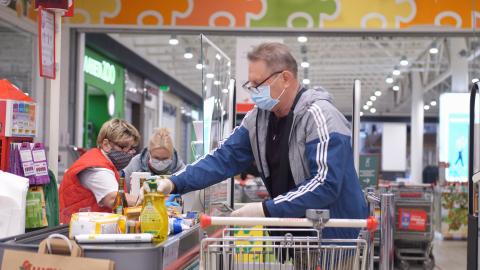 The number of workers on grocery industry payrolls fell in May, data shows.

According to the jobs report released June 4 by the U.S. Bureau of Labor Statistics, the domestic economy added 559,000 jobs in May and the unemployment rate decreased to 5.8% from 6.1% the previous month. Wages also rose slightly during that timeframe.

In the grocery sector, employment declined for the third consecutive month, a shift attributed to consumers’ return to eating more meals away from home. The Stop & Shop banner of Ahold Delhaize USA recently announced that it was seeking to fill more than 1,000 part-time jobs in the New York City area. The Bashas’ chain announced that it was also hiring 700 part-time and full-time positions at its locations in Arizona.

Still, there are bright spots for grocers. According to a recent report from the Federal Reserve Bank of Chicago, consumers’ renewed optimism is showing up in their buying habits, including trade-ups to more premium meats, seafood and wines. Another report released by The Freedonia Group in late May affirms that food and beverage sales at retail are holding strong so far, even at a time of rising food prices and fresh competition from restaurants.

Ahold Delhaize USA, a division of Zaandam, Netherlands-based Ahold Delhaize, is the parent company for Ahold Delhaize’s U.S. companies, consisting of Food Lion, Giant Food, The Giant Co., Hannaford, and Stop & Shop, as well as e-grocer Peapod; Retail Business Services, a U.S. support services company providing services to the brands; and Peapod Digital Labs, its e-commerce engine. Operating more than 2,000 stores across 23 states, Ahold Delhaize USA is No. 10 on The PG 100, Progressive Grocer’s 2021 list of the top food and consumables retailers in the United States. Bashas’ Market Inc. is a family-owned company based in Chandler, Ariz. The company is No. 78 on The PG 100.