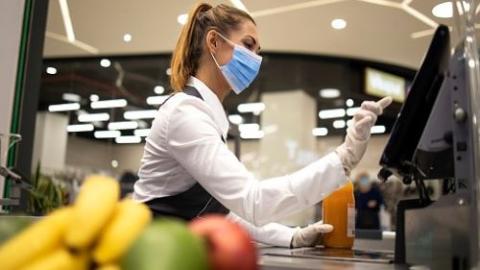 The California Grocers Association (CGA), which represents more than 300 retailers, is continuing its battle against enforcing extra-pay mandates for select grocery workers, as it has now filed federal lawsuits against the cities of Santa Ana and Irvine, challenging ordinances approved in those cities. The ordinances mandate an additional $4 per hour in extra pay. CGA claims that the mandates violate the National Labor Relations Act and equal-protection clauses in the U.S. and California constitutions.

“In addition to clearly violating federal and state law, the extra-pay mandates will harm customers and workers,” said Ron Fong, president and CEO of Sacramento-based CGA. “A $4/hour mandate amounts to a 28% average increase in labor costs for grocery stores. That is too big a cost increase for any grocery retailer to absorb without consequence. Options are few. Either pass the costs to customers, cut employee or store hours, or close. Already five stores in Los Angeles County have closed after extra-pay mandates were enacted.”

The Kroger Co. is closing two Ralphs stores and one Food 4 Less store in the area. According to a statement from Kroger, the mandate will add an additional $20 million in operating costs over the next 120 days, making it financially unsustainable to continue operating the underperforming locations.

Since the start of the pandemic, Kroger, like other retailers, has invested billions of dollars to reward associates and implemented dozens of safety measures that continue to be followed today. The grocer continues to provide incentives for employees, including recently issuing $50 million in rewards to front-line associates.

A recent economic impact study found that an extra pay mandate of $5 per hour could raise consumer grocery prices by about $400 annually for the typical family of four. Alternatively, if grocers were forced to find offsetting savings in operational costs, it would mean a 22% across-the-board reduction in work hours, hurting the very workers these proposals aim to help.

The Santa Ana and Irvine lawsuits follow days after CGA filed federal lawsuits against the cities of Daly City and San Jose, challenging pay mandate ordinances approved in those cities. Daly City has mandated an additional $5 per hour, and San Jose $3 per hour in extra pay. Other Californian cities that CGA has filed lawsuits against include Long Beach, Montebello, Oakland, San Leandro and West Hollywood, all alleging similar violations of law.

According to CGA, the extra-pay mandates passed by the cities have been illegal in two main ways: 1) By singling out certain grocers and ignoring other groups that employ essential front-line workers, the ordinances violate the U.S. Constitution and the California Constitution’s Equal Protection Clauses, which require similarly situated people to be treated alike; and 2) the ordinances are pre-empted by the federal National Labor Relations Act, which protects the integrity of the collective-bargaining process.

The suits against Santa Ana and Irvine were filed in the Orange County Superior Court. Both ask the courts to declare the ordinances invalid and unconstitutional.

“Grocery store workers are front-line heroes, and that’s why grocers have already undertaken a massive effort to institute measures to make both workers and customers safer in stores,” continued Fong. “Firefighters, police officers, health care workers, as well as transportation, sanitation and restaurant workers, are essential, yet grocers are the only businesses being targeted for extra pay mandates. These ordinances will not make workers any safer.”

In voting to approve the ordinances, CGA claims that local officials have ignored low profit margins and significant operational costs that grocers have incurred in response to the pandemic, including the hiring of tens of thousands of additional employees due to the pandemic.

CGA isn’t the only organization opposed to the pay mandates. The Northwest Grocery Association and the Washington Food Industry Association filed a lawsuit last month against the city of Seattle, challenging an ordinance approved by the Seattle City Council that took effect Feb. 3. The ordinance mandates extra pay of $4 per hour for many grocery store employees. The Seattle lawsuit makes similar claims to CGA’s actions.