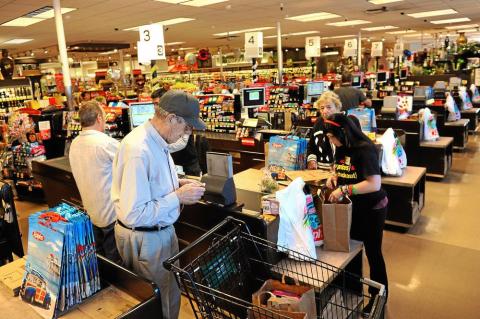 The average hourly wage for Ralphs and Food 4 Less associates in Los Angeles is $18 an hour and total compensation is $24 an hour.

The Kroger Co. is closing two Ralphs stores and one Food 4 Less store in Los Angeles, a decision accelerated by a new city council mandate that requires extra pay for front-line workers.

According to a statement from Kroger, the mandate will add an additional $20 million in operating costs over the next 120 days, making it financially unsustainable to continue operating the underperforming locations.

“Ralphs and Food 4 Less provide affordable, fresh groceries, good and stable jobs with growth opportunities to thousands of Los Angeles residents, and proudly supports local community organizations across the city. Unfortunately, the Los Angeles City Council disregarded their own Economic Impact Report by not considering that grocery stores — even in a pandemic — operate on razor-thin profit margins in a very competitive landscape. It’s never our desire to close a store, but when you factor in the increased costs of operating during COVID-19, consistent financial losses at these three locations, and an extra pay mandate that will cost nearly $20 million over the next 120 days, it becomes impossible to operate these three stores,” said a Kroger company spokesperson.

The following three affected store locations will remain open and operational for the next 60 days, closing on May 15.

“We are focused on and stand ready to work with state and local governments to prioritize vaccine distribution to front-line workers, like our associates, as quickly as possible. This week in Los Angeles we are hosting three vaccine clinics for associates, with additional events to be hosted in the following weeks. Prioritizing vaccinations — not arbitrary mandates for extra pay — is what will keep front-line workers protected,” continued the company spokesperson.

Grocery employees have been backing the pay mandates as necessary and deserved during the COVID-19 economic downturn.

On Wednesday UFCW International President Marc Perrone released the following statement regarding the closures: “Kroger has made billions in pandemic profits thanks to essential grocery workers in California and across the country. Kroger’s action today is a cruel attack on essential workers and threatens the food supply for California communities devastated by the explosion of COVID-19 infections in recent months. Essential workers in grocery stores are putting their health at risk every day to make sure families can put food on the table and city leaders are stepping up to ensure they have the hazard pay they have earned."

Grocery chains have been pushing back against pay mandates approved in Seattle, Long Beach, California, New York, Los Angeles and other cities.

“As we said weeks ago, extra pay ordinances will have negative consequences and harm customers and workers,” said Ron Fong, president and CEO of the California Grocers Association. “Three more store closures in Los Angeles County means workers there stand to lose their good-paying jobs with generous benefits. Customers lose access to a neighborhood grocery close by. It’s a lose-lose all the way around and it is the direct result of elected officials who are passing these unworkable and costly mandates."

The Valley Industry and Commerce Association (VICA) issued an even harsher statement:

“The future is bleak for Los Angeles," said Stuart Waldman, president of VICA. "If the City Council continues to insert itself in business affairs, disregarding community concerns, expert warnings, and concrete evidence, businesses will not want to invest in Los Angeles. I hope the Council considers the long-term economic impacts of this decision. VICA thanks our front-line workers, but these exclusive and rushed provisions are simply bad policies that will have lasting negative effects on our city. "

Ralphs and Food 4 Less are providing the mandated extra pay to all associates, including those in the three locations scheduled to close as well as the other 65 stores in Los Angeles.  Store representatives will meet with each impacted associate individually to help them with this transition and will comply with any contractual commitments and consider any transfer requests.

The extra pay is in addition to the total compensation package Ralphs and Food 4 Less currently offers to associates, including competitive wages, comprehensive health care and a reliable pension. The average hourly wage for Ralphs and Food 4 Less associates in Los Angeles is $18 an hour and total compensation is $24 an hour, with premium health care and stable pension benefits factored in, the company said.

Since the start of the pandemic, Kroger has invested $2.5 billion to both reward associates and implemented dozens of safety measures that continue to be followed today, including $1 billion to better secure pensions. The company also continues to provide incentives for associates, including recently issuing $50 million in rewards to front-line associates.

To date, nearly 20% of Ralphs and Food 4 Less associates have received their first dose or have been fully vaccinated. The grocers are hosting three vaccine clinics for associates this week in Los Angeles, with additional events to be hosted in the following weeks. All associates are strongly encouraged to receive the COVID-19 vaccine to help create safer communities, and Ralphs and Food 4 Less are offering a one-time reward of $100 to associates who receive the recommended doses of the COVID-19 vaccine.

Cincinnati-based Kroger employs nearly half a million associates who serve 9 million-plus customers daily through a seamless digital shopping experience and 2,800 retail food stores under a variety of banner names. The company is No. 3 on The PG 100, Progressive Grocer’s 2020 list of the top food and consumables retailers in North America. Kroger operates 188 Ralphs stores who serve customers daily through a seamless shopping experience throughout Southern California and the Central Coast, and 129 price-impact, warehouse-format supermarkets under the banners Food 4 Less in Southern California, Illinois and Indiana, and Foods Co in Central and Northern California.