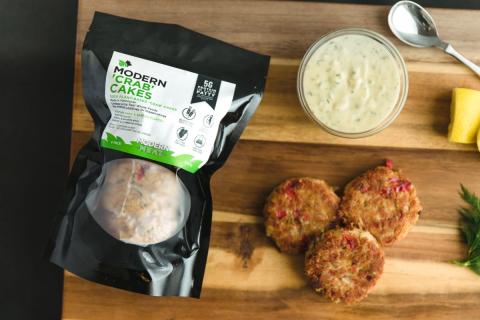 Modern Meat has completed the acquisition of Kitskitchen to expand its plant-based product line.

Known as a plant-based meat manufacturer,Modern Meat Inc. is strengthening its line of healthy artisan vegan products by completing the acquisition of Kitskitchen Health Foods Inc. Kitskitchen is a plant-based soup company with a portfolio of gourmet products that are available in many online and Canadian grocers across British Columbia and Alberta, including Nesters Market and Whole Foods Market stores.

"In a very short period of time, the Modern Meat team has made tremendous progress in growing and shaping its plant-based products portfolio through several strategic industry acquisitions," said Tara Haddad, founder and CEO of Vancouver, British Columbia-based Modern Meat. "We are thrilled to finalize the acquisition of Kitskitchen and are confident that we will profitably expand this brand across Canada and internationally in the coming years. The combination of these two emerging companies will create a diversified vegan food company with a multichannel sales and distribution network positioned for long-term sustainable growth."

On closing, Modern Meat issued 300,000 shares to Emprise Acquisition Corp. and issued 9,000 shares as a finder's fee for this transaction.

As demand for plant-based products progressively increases, Modern Meat continues to innovate. For example, the food company recently entered the “smart” vending sphere, having beenchosen as a key product in the cutting-edge Smart Vending Solution — a vending machine to be placed in high- traffic areas in British Columbia, targeting consumers with healthy consumption habits. Modern Meat will include premade meals and juices from its Modern Wellness Bar in the vending machine.

Additionally, Modern Meat has increased its product awareness by entering into an agreement last month with food distributor Legends Haul, who will be retailing Modern Meat products through its retail e-commerce, and retail and foodservice distribution channels.

The Coquitlam, British Columbia-based food distributor offers locally made in-season food and produce, specifically focusing on wholesome foods. Currently, Legends Haul has more than 225,000 users that transacted 40,000-plus times over its last quarter. In addition to its retail and online presence, Legends Haul has 12 delivery trucks that service its order flow within British Columbia.