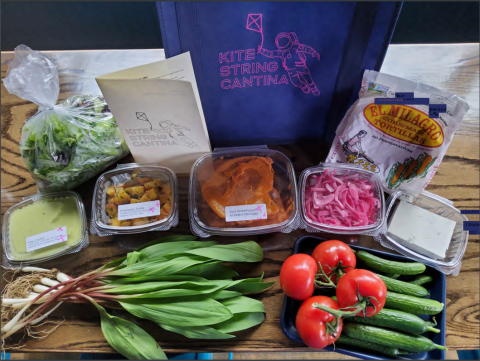 According to new consumer research from Culinary Visions, a food-focused insights and trends forecasting practice, meal kits are well on their way to becoming a mainstream phenomenon, with 49% of consumers ages 18-34 saying that meal kits are part of their weekly grocery routine. Meal kits are most attractive to households with three or more people, Culinary Visions found, with 49% of consumers in such households using this option on a weekly basis.

The current crop of meal kits appeals to consumers who are increasingly enjoying cooking at home and want to try new foods and preparation methods. In Culinary Visions' study, 91% of those surveyed said they enjoy cooking at home and 76% think of themselves as adventurous eaters. Smart food marketers and creative chefs have been developing, updating and tweaking their meal kit offerings for value-conscious, well-informed consumers.

“After being popularized in northern Europe around 2007, meal kits first entered the U.S. food scene about 10 years ago,” said Sharon Olson, executive director of Culinary Visions, a division and registered trademark of Chicago-based Olson Communications Inc. “They were quick to appeal to higher-income households and trailblazing consumers, yet struggled with value perception and repeat purchases. Our new survey points to broader appeal and repeat purchase of meal kits, with more than 34% of respondents in households earning between $50,000 and $74,000 per year considering meal kits a weekly grocery routine.”

Of particular interest to consumers are kits that are a creative collaboration between a restaurant chef and a local farmer, cited by 72% of those surveyed. With 41% of participants in the survey reporting that someone in their household has dietary restrictions, sensitivities or allergies, meals kits designed for this group were most desirable to Millennial and Gen X consumers. Seventy-two percent of respondents age 18-34 and 65% of those age 35-54 said they would be interested in a meal kit that met specific dietary needs that were important to them.

Meal kit makers often provide customer service and support beyond the box, with educational tools to ensure successful home preparation. Unlike fully prepared to-go meals, meal kits require customers to have basic cooking skills, and many may not be that confident in their abilities: 68% of respondents said that they would like a video tutorial from a chef to accompany the box of ingredients.

First-generation meal kits were delivered directly to customers’ homes, and the past few pandemic years have solidified delivery as a routine aspect of everyday life. Now, however, consumers are venturing out more to restaurants and are more willing to pick up items rather than having all of their food delivered. Culinary Visions’ study found that 71% of consumers are interested in a box of ingredients and prepared sauces to purchase at a restaurant and take home. This concept of a mini marketplace or retail food boutique is emerging in restaurants across the United States, providing consumers with more choices – and supermarkets with more competition – when it comes to meal solutions.

For Culinary Vision’s research, 2,079 US consumers were surveyed in March 2022 regarding specific aspects of their food lifestyles. Six hundred and sixty of those surveyed were ages 18-34, 792 were ages 35-54, and 621 were ages 55 and older. The consumer female-to-male ratio was 55:52, respectively. Of those consumers surveyed, 1,258 live in a one- or two-person household, and 821 live in a household of three or more people.