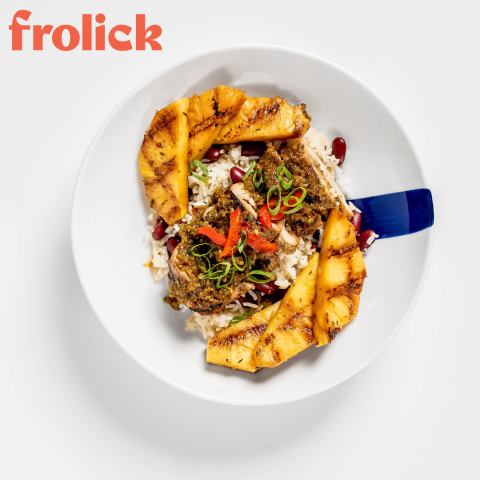 Along with new funding, Frolick has doubled its service area, expanding delivery from its hometown of Reston, Va., across the river to Washington, D.C.

Frolick, which bills itself as the first meal delivery company offering hot, chef-prepared meals starting at under $10 with no fees or order minimums, has raised a pre-seed round of $1.8 million to help fund hiring, marketing and geographic expansion. Among the participants in the round were Swiss multinational gategroup as strategic investor and several angels, including current and former executives at Delivery Hero and Gopuff.

Frolick has also doubled its service area, expanding delivery from its hometown of Reston, Va., across the river to Washington, D.C.

“Our belief, especially in this economy, is that meal delivery won’t really take off for the masses until fees are eliminated,” said Frolick founder Jipy Mohanty, a former exec at Berlin-based Delivery Hero. “Frolick’s reception in [northern Virginia] has been very strong, and we’ve had hundreds of requests for service in D.C. and other cities. Our cost structure gives us a clear path to profitability, and we’re already working on a playbook for national expansion.”

“It’s a brilliant concept that requires very little upfront infrastructure cost,” noted Maurus Lienhard, president foodservice and corporate development at gategroup. “We could see immediately that the demand was there. We are thrilled to partner in this exciting project and are looking forward to working closely with Jipy and the Frolick team to expand the service into additional cities in the coming months.”

Frolick customers include consumers and businesses that tend to order from Frolick four to five times per month. Its customers tend to be full-time workers, often with families, who want a break from cooking, while its business customers tend to have up to 150 local employees, and are looking for creative ways to bring people back to the office.

The company has developed custom software to manage its logistics and delivery, following many of the same principles as Amazon Prime, including order batching by neighborhood. Drivers are contractors who are paid a minimum of $20 per hour and deliver five to 20 orders per trip to optimize efficiency.

“We’ve been paying careful attention to what’s worked and what hasn’t for other food and meal delivery companies,” added Mohanty. “Now we’re ready to take that knowledge forward with a service that’s designed for mass market appeal.”

Seattle-based Amazon is No. 2 on The PG 100, Progressive Grocer’s 2022 list of the top food and consumables retailers in North America, while Philadelphia-based Gopuff is No. 79 on PG’s list.