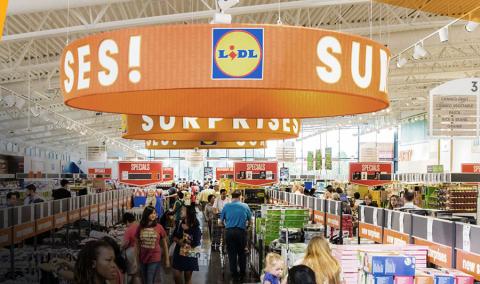 Despite a disappointing performance in the United States to date, Lidl still resonates with younger shoppers in particular, according to an Oliver Wyman survey

Since entering the United States last year, Lidl, long Europe’s leading hard-discount grocer, is having a significant effect on grocery consumers here, despite an underwhelming performance so far in this country, global consulting firm Oliver Wyman has found.

The independent survey by the New York-based firm discovered that 48 percent of 600 consumers who have shopped at Lidl are now shopping there regularly (defined as more than twice per month). Consumers also are spending more per shopping trip at Lidl now than a year ago, indicating that they’ve found a broader of Lidl products they prefer. Younger shoppers – those age 18 to 34 – had a particularly high awareness of Lidl and shopped there frequently, spurred by their positive perceptions of Lidl’s private-brand product quality and its value prices.

“Lidl is new in the U.S. market, and we expect that they will gradually adapt their model based on consumer feedback, a pattern they successfully honed entering more than 20 countries in Europe,” said Tanja Ebner, principal in Oliver Wyman’s retail and consumer goods practice. “What Lidl has done so far has struck a chord with younger consumers who are valuing Lidl’s good private-brand product quality almost as much as their low prices.” The chain's offering is about 90 percent private label products, Ebner noted during a call discussing the survey's results.

Key findings of the survey include:

Additionally, U.S. consumers are interested in value formats: While Lidl currently has only 55 stores in six states, rival European hard-discounter Aldi already has a network of 1,600-plus stores here, with plans to grow to 2,500 locations.

“Hard discounters are in the U.S. to stay and win,” affirmed George Faigen, partner in the Retail and Consumer Goods practice of Oliver Wyman. “Incumbent grocers must evolve, redefining their business to align with the consumers’ demands for high quality and value. Grocers need to double down on what they believe makes them uniquely attractive to their consumers, otherwise they risk a certain defection of sales, profit and customers.”

When asked during the call discussing the survey results why, if the chain was proving popular with those who shopped there, the grocer had decided to pull back on its original growth plans, Faigen responded the Lidl was most likely taking the time to “tune” its offering to the U.S. shopper’s tastes and preferences, with the expectation of long-term success, and that as an “agile” company, it would eventually be able to “match itself to the needs of consumers.”

Fielded in the United States last April, the online questionnaire surveyed 3,600 individuals in the states where Lidl operates stores: North Carolina, South Carolina, Virginia, Delaware, New Jersey, and Georgia. Of the respondents, 600 had shopped at Lidl already, and were asked about their experiences in detail. The sample of 600 Lidl shoppers consisted of 52 percent female consumers, 81 percent with a household income between $25,000 and $150,000, and 35 percent Millennials (ages 18-34).