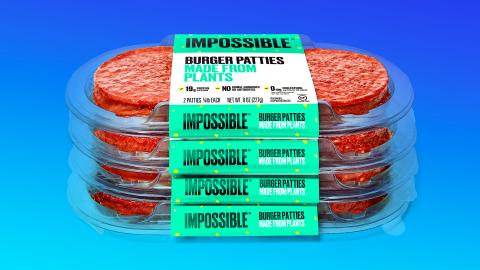 The year 2020 was big for Impossible Foods, which ramped up distribution to more than 22,000 grocery stores in the United States and expanded its supermarket footprint by more than a hundred times. Lidl, too, is on a strong growth path: the German discount grocery chain plans to open 50 new stores by the end of this year for a total of 150 locations in the United States.

“We are excited to launch Impossible Foods products in our stores starting this week, especially as we see the growing enthusiasm of our customers for plant-based products,” said Stefan Schwarz, EVP of purchasing for Lidl U.S. “Lidl’s best-in-industry pricing for Impossible Foods’ patties is also an example of our commitment to high quality products at unbelievably low prices.”

According to Impossible Foods’ President Dennis Woodside, this will be a mutually beneficial partnership.

"Through our relationship with Lidl we also hope to learn valuable insights about serving the European market, one that is hugely important to us and our long-term mission. We believe that delicious and sustainable plant-based meat will help Europe achieve its ambitious environmental targets by displacing demand for resource-intensive animal agriculture,” he remarked.

Impossible Burgers will be sold in the fresh meat case at Lidl in two varieties: a 12-ounce package that retails for $5.99 and a two-patty package priced under $5. Shoppers can buy the products online for home delivery as well.

Neckarsulm, Germany-based Lidl operates about 11,200 stores in 32 countries, employing more than 310,000 employees worldwide. In the United States, the Arlington, Virginia-based grocer has more than 130 stores in nine East Coast states. The company is No. 96 on the PG 100, Progressive Grocer’s 2020 list of the top food and consumables retailers in North America.

Privately held Impossible Foods was founded in 2011 as a producer of alternative meat and dairy products. Its scientists’ best-known achievement to date is the plant-based Impossible Burger, which launched in retail stores in September 2019. It contains no animal ingredients, animal hormones or antibiotics. According to the company, it uses 96% less land, 87% less water and generates 89% fewer greenhouse gas emissions compared with conventional beef from cows — environmental benefits that also translate to economic efficiencies.