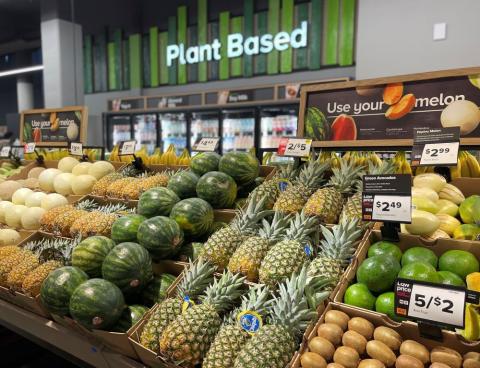 An increasing number of retailers are calling out their plant-based offerings with prominent signage.

Plant-based proteins enjoyed tremendous growth in 2020, and the category saw a record level of investment activity, outpacing the rate of growth in the overall meat category.

After several years of securing distribution and generating trial through aggressive promotion and merchandising tactics, the plant-based meat category was in the right place at the right time during 2020. Shoppers stocked up on proteins at the outset of the pandemic, and plant-based products found their way into more shopping carts, and onto more dinner plates, when Americans were forced to eat more meals at home. Coupled with ongoing trends toward flexitarian diets, the result was that plant-based meat sales increased 45% to $1.4 billion during the 52-week period ended Dec. 27, 2020, according to a report from The Good Food Institute (GFI), The Plant-Based Foods Association (PBFA) and SPINS.

This growth was especially evident in the performance of market leader Beyond Meat. The El Segundo, Calif.-based company, whose products are sold at 28,000 U.S. retail outlets, saw sales in its U.S. retail segment increase 104.1% to $264 million, during its fiscal year ended Dec. 31, 2020. Those gains were offset by sales declines in foodservice, which caused total company sales to increase 36.6% to $406.8 million.

“Our ambition is to build Beyond Meat into a global plant-based protein company similar in scale to the largest animal protein companies today, and notwithstanding near-term headwinds precipitated by the pandemic,” the company’s CFO, Mark Nelson, told investors when the results were released.

There are plenty of other companies with similar aspirations, whether they’re pure-play plant-based companies such as Impossible Foods or major CPG companies with plant-based brands such as Kellogg (Morningstar Farms) Conagra Brands (Gardein), Kraft Heinz (Boca Burger) and Hormel Foods (Happy Little Plants). Major retailers have entered the fray, too, including The Kroger Co., which launched its Simple Truth Emerge brand of plant-based meats in January 2020.

The Power of Plant-Based

Meat consumption, whether animal- or plant-based, looked very different in 2020, driven by a combination of evolving attitudes toward eating meat and the massive volume of displaced demand from foodservice operators as a result of the pandemic.

For example, 19% of consumers are now self-described flexitarians, meaning that they eat mostly a plant-based diet with occasional meat and/or poultry, compared with 10% in 2019, according to the 16th annual “Power of Meat 2021” report, released in March. The major research initiative was conducted by San Antonio-based 210 Analytics on behalf of FMI — The Food Industry Association and the Meat Institute’s Foundation for Meat and Poultry Research and Education, and released during the American Meat Conference.

Meanwhile, the share of self-described meat eaters decreased from 85% in 2019 to 71% in 2021. The share of vegans/vegetarians remains relatively low, at 6%, according to “The Power of Meat 2021.” Roughly three-fourth of those surveyed agree that meat and poultry belong in a healthy, balanced diet, while 34% of shoppers want to reduce their meat/poultry consumption, citing concerns about the healthfulness of red meat and the presence of antibiotics/hormones as the top reasons.

The report, based on data from Chicago-based IRI, showed refrigerated plant-based meat alternatives remain a small but growing niche, with household penetration slightly less than 10%. IRI data shows that 2020 sales in the category increased 83.9% to $475.3 million. Due to differences in how IRI defines the category compared with the GFI and PBFA report based on SPINS data, IRI showed the category as smaller but growing faster.

Either way, plant-based meat remains a tiny segment of the larger meat department, which experienced tremendous growth in 2020. Sales increased 19.2% to reach $82.5 billion, and were driven by more shopping trips for meat and greater spending on meat per trip, according to “The Power of Meat 2021.”

The expectation that plant-based proteins will gain market share in the overall meat category has investors throwing money at the space. A record $3.1 billion — more than double the $1.4 billion plant-based meat sales figure from Chicago-based SPINS — was invested in alternative proteins in 2020, according to GFI. That figure is broader than meat, and also includes egg and dairy, cultivated meat, and fermentation companies devoted to alternative proteins.

“The investor community is waking up to the massive social and economic potential of food technology to radically remake our food system,” says Sharyn Murray, a senior investor engagement specialist with Washington, D.C.-based GFI. “Early trendsetters like Impossible Foods, Beyond Meat, Memphis Meats and Mosa Meat continue to perform well, and there are more and more entrepreneurs who see the potential of alternative proteins to succeed in the marketplace while having a positive global impact on food sustainability and global health.”

GFI’s director of corporate engagement, Caroline Bushnell, contends that even more investment is needed because plant-based companies are playing a key role in solving an urgent crisis.

“A large-scale shift toward alternative proteins will be critical to mitigating the environmental impact of food production, meeting the Paris Climate Agreement and sustainably feeding a growing global population,” asserts Bushnell.

Plant-based protein providers have made eating meat alternatives a key element of their brands’ value proposition, an approach that appeals to many consumers and climate activists. The most notable of these is Microsoft co-founder Bill Gates. In a February MIT Technology Review article discussing his new book, “How to Avoid a Climate Disaster,” Gates spoke about the meat industry and the role it can play in eliminating greenhouse-gas emissions.

“I do think all rich countries should move to 100% synthetic beef,” Gates noted. “You can get used to the taste difference, and the claim is they’re going to make it taste even better over time. Eventually, that green premium is modest enough that you can sort of change the [behavior of] people or use regulation to totally shift the demand.”

Although conceding that the politics of food regulations and product labeling are challenging, Gates misjudges consumer behavior by suggesting that climate change will trump taste when it comes to deciding among plant-based, lab-grown or conventional meat.

If plant-based protein providers can get their flavor profiles right and achieve greater price parity with conventional meat producers, then further share gains are likely. Impossible Foods CEO and founder Dr. Patrick Brown made that point recently, when the company revealed a 20% price cut.

“Our plan is to reverse global warming and halt our planet’s extinction crisis by making the food system sustainable,” Brown said when the price cut made news in February. “To do that, we need to make meat better in every way that matters to consumers — taste, nutrition, convenience and affordability. With economies of scale, we intend to keep lowering prices until we undercut those of ground beef from cows.”

Lower prices should help, but the data suggests that there’s work to be done on taste. For example, the repeat purchase rate for plant-based meat, according to the recent GFI/PBFA report, is currently 63%. Products sales benefited from expanded distribution, promotional incentives and unprecedented retail demand in 2020. Increasing the repeat purchase rate in 2021 through great taste will be the best indicator of the enduring popularity of plant-based proteins.