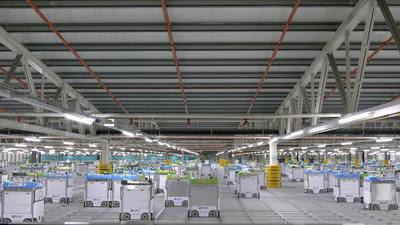 A new 350,000-square-foot CFC will accelerate Kroger's ability to expand its products to a larger footprint in the Northeast.

The Kroger Co. is teaming up with Ocado to open another automated Customer Fulfillment Center (CFC) in a part of the country where customers might not have access to a Kroger store.

The new 350,000-square-foot CFC in Frederick, Md., will accelerate Kroger's ability to expand its products to a larger footprint in the Northeast. The facility at 7106 Geoffrey Way in Frederick is expected to become operational 24 months after the site breaks ground and will service several markets, including Washington, D.C., Baltimore and Philadelphia.

"Kroger is incredibly excited to construct one of our industry-leading Customer Fulfillment Centers in Maryland in relationship with Ocado to bring fresh food to our customers faster than ever before," said Robert Clark, Kroger's senior vice president of supply chain, manufacturing and sourcing. "Through our strategic partnership, we are engineering a model for the region, leveraging advanced robotics technology and creative solutions to redefine the customer experience."

Kroger has partnered with Ocado to accelerate its ability to provide customers with anything, anytime, anywhere. In June, Kroger broke ground on its first CFC in Monroe, Ohio, and has since announced additional locations in Florida, Georgia, Texas, and in the mid-Atlantic region. In November, Kroger announced a sixth CFC, that time in Wisconsin.

Kroger's deal with Ocado announced in May 2018 called for the construction of 20 highly automated grocery CFCs.