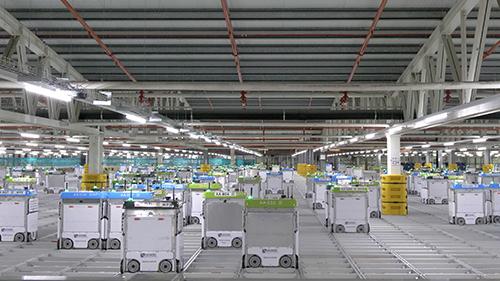 The Kroger sheds, powered by Ocado, include digital and robotic capabilities

The Kroger Co. and U.K.-based online grocer Ocado have named Forest Park, Ga., as the site for one of its "sheds," or automated warehouses. Kroger plans to build 20 of these high-tech customer fulfillment centers (CFCs) with digital and robotic capabilities in the United States.

The announcement of the $55 million Georgia CFC — which will bring more than 400 new jobs to the area — comes one month after Kroger and Ocado broke ground on the first shed, in Monroe, Ohio.

According to Kroger, the CFCs are meant to transform the ecommerce experience for its customers and increase the company's ability to deliver items with optimal freshness and speed throughout the country.

"The new facility will provide Kroger the ability to bring customers across the coverage area fresher food faster than ever before," said Tim Brown, president of Kroger's Atlanta division. "I'm thrilled the Atlanta market was selected as one of the 20 CFC sites, and this location is a tribute to the commitment and enthusiasm Kroger has for the city of Forest Park, Clayton County and state of Georgia."

Kroger entered into an exclusive partnership with Ocado in May 2018 and has already announced a CFC in Groveland, Fla., as well.

"Kroger is incredibly excited to construct one of our industry-leading customer fulfillment centers in Forest Park — a city south of Atlanta — through our relationship with Ocado," said Robert Clark, Kroger's SVP of supply chain, manufacturing and sourcing. "Through our strategic partnership, we are leveraging advanced robotics technology and creative solutions to redefine the customer experience across America."