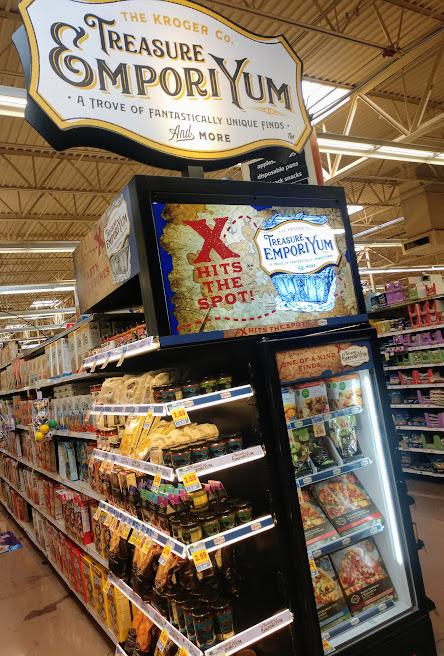 X marks the spot — or in Kroger’s case, hits the spot.

That’s the theme of a new private-brand program that The Kroger Co. announced, among other things, at its 2019 annual stockholders meeting in Cincinnati late last month.

I had occasion to be in the room that morning when the grocery retailing giant and its ardent supporters, as well as some of its critics, passionately voiced their thoughts about the company. To be sure, the hour-plus session didn’t lack for sizzle reels showcasing Kroger’s dedicated workforce, omnichannel investments, sustainability initiatives and other projects.

The fanfare wasn’t unjustified — Kroger has excelled at redefining what it means to be a food retailer in an age when shoppers would just as soon buy groceries from their sofas as go to the store.

Yet some who addressed CEO and Chairman Rodney McMullen as he presided over the meeting expressed concerns — magnified by Kroger’s flailing stock price of late — that the retailer is focusing too many of its efforts on technology and is neglecting the in-store experience. Of course, others said, hell no, Kroger is awesome inside and out.

But the concern isn’t without merit. After all, even with the very gradual increase in online grocery commerce, physical stores still have an important role to play.

In fact, an NPD Group report released in late June notes that, despite the rise of online ordering, brick-and-mortar grocery stores will remain a necessary means of purchasing food.

The percentage of U.S. consumers age 18 and older who shopped online for groceries within a 30-day period, whether for delivery or pickup at a store, grew from 17 percent in the quarter ending November 2018 to 20 percent, or about 51 million consumers, in the quarter ending February 2019, according to NPD’s study.

“Digital purchasing will accelerate in food retailing, just as it has in other retail sectors where we see much higher rates of online purchases,” noted NPD’s David Portalatin. “Still, the brick-and-mortar grocery store will always be a necessary means of acquiring foods, especially those where consumers place a premium on their sensory assessment to ensure quality, like meats, fruits and vegetables. This gives forward-thinking retailers and their vendor partners an opportunity to truly create an omnichannel experience for the consumer and revolutionize the way we think about grocery merchandising.”

And there’s ample evidence that Kroger isn’t ignoring this reality, even while aggressively pursuing its omnichannel strategy.

The X mentioned above marks the spots of curated store-branded products that are part of Kroger’s Treasure EmporiYum, being rolled out this summer to 200 Kroger Marketplace stores. Highlighted in an in-store publication, products range from Kroger Cuban Style Sandwich Kettle Cooked Chips and Private Selection Regional BBQ Seasoning Rubs to Simple Truth Omelet Bites and Hemisfares pastas and sauces.

With a bold endcap display like the one I saw at the Kroger Marketplace store in Newport, Ky., near Cincinnati, the campaign brings excitement and drives trial for a range of international and specialty products.

Kroger’s proven to be a whiz with store brands; its Simple Truth line, which didn’t even exist five years ago, has grown into a $2 billion brand, McMullen noted at the meeting. 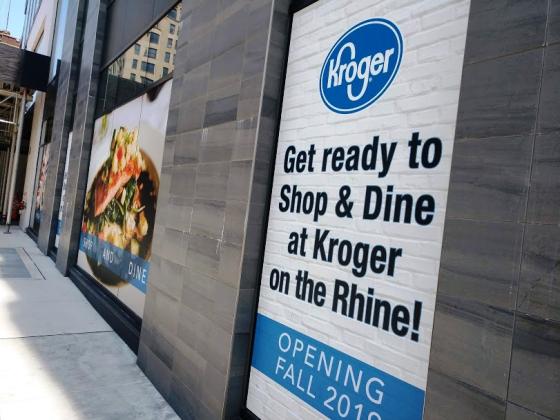 Kroger's new flagship store in downtown Cincinnati, scheduled to open this fall, will include a food hall with five restaurants

Meanwhile, just a few blocks away from the meeting site, work was progressing on Kroger’s new flagship store in downtown Cincinnati, a two-story market at the base of a new residential tower. In addition to a full supermarket, the store will include a full bar and a food hall featuring five restaurants, including the latest location of Kroger’s own Kitchen 1883 full-service dining concept, along with Eli’s BBQ, Dope Asian Street Fare, Django Western Taco and Queen City Whip.

Expected to open in September, the 45,000-square-foot store — to be known as Kroger On the Rhine, for the neighborhood where it’s located — will replace an existing store on Vine Street near Kroger’s corporate headquarters.

Also while in Cincinnati, I got to see the northern Kentucky pilot stores in Kroger’s partnership with Walgreens, which places Kroger Express grocery centers within several Walgreens drug stores, offering produce, meat, meal kits and other grocery items. Each of these stores is also a pickup center for online Kroger orders, so these sites are leveraging both physical and digital to enhance service.

McMullen said such partnerships are “one of the most exciting areas of Restock Kroger because it accelerates our ability to serve customers.”

Other partnerships: Loop, the circular ecommerce platform with a reusable packaging system; and, of course, Ocado, which “will help us reinvent the cost model for customer fulfillment,” McMullen said, adding later, “Kroger is transitioning from a grocery company to a growth company.”

Online will continue to grow industry-wide (Kroger’s digital sales were up 42 percent in Q1 this year, McMullen said), but in-store will always be important to the shopping experience. After all, what’s driving sales are those fresh areas that many folks still don’t quite trust to anonymous online ordering. 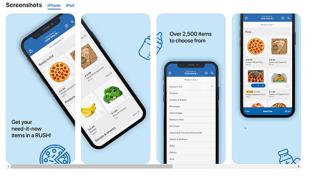 Rush service is being tested in Cincinnati market 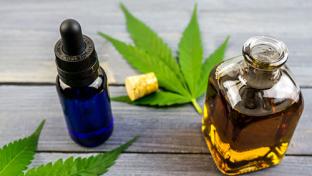 Kroger to Sell CBD Products at Stores in 17 States 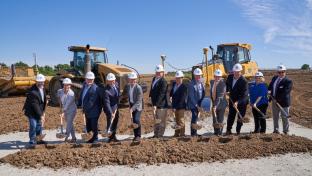 High-tech Ohio location is one of 20 planned