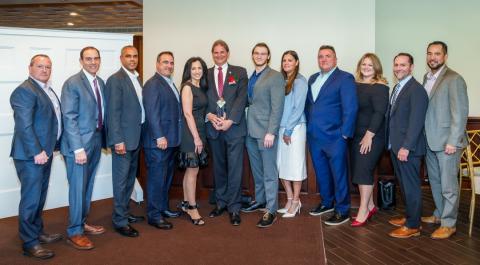 The New Jersey Food Council has named Krasdale Foods President and COO Gus Lebiak an Industry Achievement Award honoree during its Night of Distinction event at the Palace at Somerset on May 17.

“As a colleague and industry friend for more than 25 years, it was a special moment to honor Gus at this year's Night of Distinction event,” said Linda Doherty, president and CEO of the Trenton-based New Jersey Food Council. “Gus' contributions to the Food Council and our industry over the course of his career exemplify why he is so deserving of such recognition. His high standard for excellence and collaboration are qualities for future Industry Achievement Award honorees to emulate."

An independent family-owned grocery distribution, merchandising and marketing services company, Krasdale has 20 stores in New Jersey that operate under the CTown and Bravo supermarket banners.

“Gus has always worked to create a culture of collaboration, that has been an important driver of success,” said Thatcher Krasne, CEO and president of White Plains, N.Y.-based Alpha 1 Marketing, Krasdale’s marketing and merchandising division. “Since taking over at the helm of the company nearly two years ago, Gus has navigated unprecedented supply chain crises while also driving growth in key markets. I offer my congratulations to Gus on this well-deserved recognition.”

In addition to Lebiak, three other grocery executives were honored by the New Jersey Food Council at its Night of Distinction event: Christine Curtis, SVP and general manager for C&S Wholesale Grocers; Keven McDonnel, SVP of Price Rite Marketplace; and Gordon Reid, president of Stop & Shop.

Founded in 1908, White Plains, N.Y.-based Krasdale has expanded throughout the Northeast and Florida, with store banners that include C-Town, Bravo, Aim, Market Fresh, Shop Smart Food Markets and Stop 1 Food Mart. Meanwhile, Keene, N.H.-based C&S Wholesale Grocers is No. 17 on The PG 100, Progressive Grocer’s 2022 list of the top retailers of food and consumables in North America; Keasbey, N.J.-based Wakefern Food Corp., which owns Price Rite, is No. 25 on The PG 100; and Stop & Shop’s parent company, the U.S. division of Zaandam, Netherlands-based Ahold Delhaize, is No. 10 on the list.