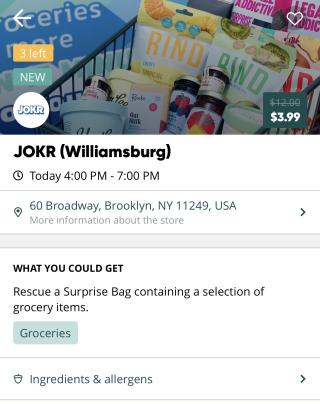 Jokr and Too Good To Go are enabling people in two New York City communities to order a surprise Jokr bag and pick up at local hubs food, groceries and pantry items that were about to go to waste.

The app acts as a marketplace connecting consumers with surplus items from restaurants, bakeries, cafés and grocery stores at the end of each business day, so that food doesn’t go to waste. Users can search for surplus, place an order and pick up a "surprise bag" from a partner location for one-third of the retail price.

Under the Jokr-TGTG partnership, people can order a surprise Jokr bag and pick up at local hubs food, groceries and pantry items that were about to go to waste. With a retail value of $15, the bags are available exclusively at Jokr hubs for just $5.

The partnership went live in the New York City neighborhoods of Williamsburg (Brooklyn) and Long Island City (Queens) on July 14, with plans to expand to other communities in the area later this month. So far, Jokr and TGTG have already saved more than 100 surprise bags and are estimated to reach a total of 15,834 bags by 2022, saving more than 87,087 pounds of food waste.

New York-based Jokr now has 100 hubs worldwide, with overall order volume doubling every two weeks or so. Customers can receive delivery of a wide assortment of grocery and retail items at their doors in 15 minutes or less. The company recently completed a $170 million Series A funding round, one of the largest in recent years, just months after starting operations. Jokr launched in the United States in June, starting in New York City, with plans to roll out to at least five more U.S. cities by the end of 2021.

Copenhagen-based TGTG is now in 15 international markets, including France, the United Kingdom, the United States, Denmark, Spain, Germany and The Netherlands, and has saved more than 72 million meals across 15 countries, which adds up to 250 million pounds of food.