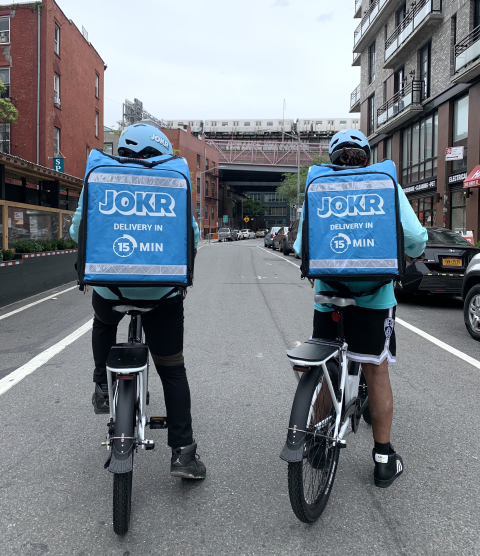 Jokr currently operates in nine cities, with plans to launch in additional cities and countries in the next few weeks.

Jokr, a grocery and retail delivery platform with operations in the United States, Latin America and Europe, has completed a $170 million Series A funding round, one of the largest in recent years, just three months after the company started operations. Led by GGV Capital, Balderton Capital and Tiger Global Management, the round was joined by Activant Capital, Greycroft, Fabrice Grinda’s FJ Labs, and Latin American tech-specialized venture capital firms Kaszek and Monashees.

Additionally, Munich, Germany-based HV Capital, Jokr’s first post-founding institutional investor, has reaffirmed its commitment in the Series A round after leading the seed financing. Jokr is led by the team that created the online food ordering and delivery service foodpanda and helped steer the success of Delivery Hero, both based in Berlin.

With headquarters in New York, where it rolled out operations in early June and is already operating 10 hubs, Jokr intends to use the capital to fund its continued growth and expansion across additional cities in the United States, Latin America and Europe. Jokr currently operates in nine cities, with plans to launch in additional cities and countries in the next few weeks.

“The investment we announced today will empower us to continue our expansion at an unprecedented rate as we continue to build Jokr into the premier platform for a new generation of online shopping, with instant delivery, a focus on local product offerings and more sustainable delivery and supply chains,” noted Jokr founder and CEO Ralf Wenzel. “We are proud to be able to partner with such a distinguished group of international tech investors to help us seize the enormous opportunity in front of us.”

Added Hans Tung, managing partner at Menlo Park, Calif.-based GGV Capital, and newly appointed member of Jokr’s board: “Ralf has put together an all-star team for food delivery that will transform the retail supply chain. The combination of food delivery experience and the sophisticated data capabilities that optimize inventory allocation and dispatch set Jokr apart. We look forward to working with the team on their mission to make retail more instant, more democratic and more sustainable.”

Since starting operations, Jokr has debuted roughly one hub per day in a growing list of cities, including New York (U.S.), São Paolo (Brazil), Mexico City (Mexico), Bogota (Colombia), Lima (Peru), Warsaw (Poland) and Vienna (Austria). Jokr now has 100 hubs worldwide, with overall order volume doubling every two weeks or so. Customers can receive delivery of a wide assortment of grocery and retail items at their doors within less than 15 minutes. Jokr is addressing a global market of more than $8 trillion in the grocery and retail space, of which only about 3% is currently online, presenting a great opportunity for the company’s platform.

Jokr also enables small local businesses to sell their goods on the platform, and currently, more than half of all ordered goods are sourced from local businesses. Including local businesses empowers them to expand their reach while eliminating the need to set up complex logistics and delivery networks on their own.

The Jokr grocery and retail delivery platform is available in the App Store and on Google Play.