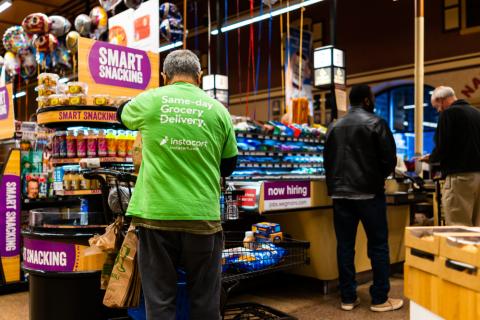 Instacart and Campbell Soup have launched the Souper Shopper Sweepstakes to celebrate the Instacart shopper community during the holiday season.

To show its appreciation for its shopper community this holiday season, Instacart has partnered with Campbell Soup Co. on a first-of-its-kind Souper Shopper Sweepstakes in which Campbell will provide $50,000 in prizes to Instacart shoppers.

All U.S.-based full-service shoppers are eligible to participate in the Souper Shopper Sweepstakes. Any shopper who completes at least 10 deliveries between Dec. 17 and Dec. 29 will be entered into the contest for a chance to win a $200 or $500 prize. In total, Campbell will provide $50,000 in prizes for Instacart to give to its shoppers, with the opportunity for more than 200 shoppers to be rewarded for their efforts during the holiday season.

"We're excited to team up with Campbell to recognize shoppers during this important time. Instacart shoppers deliver more than just groceries — they bring customers all of the ingredients they need to create special holiday memories. We're especially grateful for their efforts during the holiday season, and are proud to be partnering with Campbell to celebrate the Instacart shopper community," said Daniel Danker, VP of shopper and fulfillment at Instacart.

In addition to the $50,000 in prizes that Campbell is providing, the CPG company is also running in-app banners for Instacart customers notifying them that their order is helping a shopper qualify for entry into the Souper Shopper Sweepstakes.

"In the spirit of helping those who serve others, Campbell is proud to offer this sweepstakes to support Instacart shoppers who are delivering the essentials during this busy holiday season," said Michelle Morale, VP of digital commerce, omni shopper and sales transformation at Camden, N.J.-based Campbell. "Their efforts to help us connect people through food they love make it possible for people across North America to experience Campbell's products, and we're thrilled to partner with our friends at Instacart on this initiative."

In other Instacart shopper news, the online grocery company recently introduced new safety features to support its workers months after one of its shoppers was killed in a grocery store shooting. The company launched new Shopper Safety Alert technology to notify shoppers of localized critical incidents as soon as they occur. In addition, Instacart has enhanced its emergency calling functionality in the Shopper app, as well as introducing new resources to help the community shop safely.

San Francisco-based Instacart has partnered with more than 700 national, regional and local retailers, including unique brand names, to deliver from 65,000-plus stores across more than 5,500 cities in North America. Instacart's platform is available to over 85% of U.S. households and 90% of Canadian households. The company's enterprise technology also powers the e-commerce platforms of some of the world's biggest retail players, supporting their white-label websites, applications and delivery solutions.