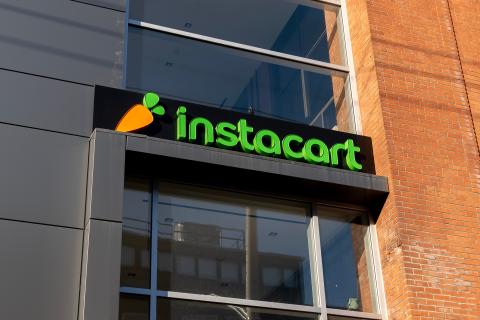 Instacart closes out a busy year with the news that its new president is leaving the organization.

It wasn’t instant, but it was definitely a short run: Carolyn Everson is out after three months as president of Instacart. She announced on Friday, Dec. 10 that she is stepping down in a few weeks.

In a Facebook post, the executive noted that she and Instacart CEO Fidji Simo, a former Facebook leader who was brought on board in July, have been friends for 10 years and agreed that the decision was in the best interest for the company and for Everson. “Although my time was short, I saw firsthand what happens when an exceptional team is pulled together with an ambitious vision and I cannot wait to watch and cheer on the journey and success of the team. Fidji and the team will always have a huge fan in me,” she wrote.

Simo shared similar sentiments in a statement released to Fortune magazine. “We believe it’s the right decision for both the company and Carolyn based on our priorities and the role she was looking for at this point in her career,” she said. “She’ll be staying on with us through the end of the year, and leaves as a friend to the company.”

A short-term break is in the near future for Everson. “I know I want to keep making a difference and keep focusing on enlightened leadership and the importance of building strong cultures for people to thrive personally and professionally,” Everson added.

Everson started with Instacart in early September, joining the grocery delivery platform following a decade-long stint at social media platform Facebook (now Meta), where she worked with Simo and she headed up advertising. She also served a corporate VP at Microsoft and as a COO at MTV Networks.

Her departure follows other high-profile personnel moves at Instacart. The company’s chief revenue officer, Seth Dellaire, recently left to take on the CRO role at Walmart.  The previous president, Nilam Ganenthiran, was named a strategic advisor to Simo in late summer.

Although there have been rumors this year that Instacart plans to go public, the company has not made any announcements about the timing or eventuality of that decision.

Instacartdelivers from 65,000 stores across more than 5,500 cities in North America. Instacart’s platform is available to over 85% of U.S. households and 90% of Canadian households.