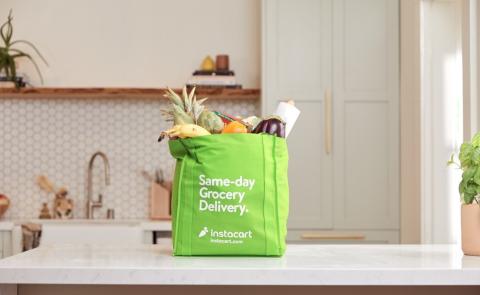 The Instacart Effect of sales growth and job creation is documented in a new research report from a major economic research firm.

Instacart created approximately 186,000 additional jobs and increased total grocery revenue by $6.4 billion from 2013 through the second quarter of 2020, according to new research commissioned by the leading online delivery platform.

The positive economic impact, dubbed “The Instacart Effect,” is documented in a major study released Sept. 23, that was conducted by Dr. Robert Kulick with NERA Economic Consulting. Given Instacart’s affiliation with the research titled, “The Economic Impact of Instacart on the U.S. Retail Grocery Industry Before and During the COVID-19 Pandemic,” the validity of the findings is sure to be heavily scrutinized.

Instacart’s new president Carolyn Everson welcomes such scrutiny, because as the lead executive representing the results and having just joined Instacart on Sept. 7, after spending the prior 10 years with Facebook, she was also skeptical of the findings. After all, given that Instacart paid for the study, why would anyone expect the outcome to be anything other than glowing?

“That was my first question too. I was very relieved to hear Dr. Kulick say, ‘I am glad you are asking that question because it is exactly what you should be asking.’ That is why we are going to publish the methodology and have it in a peer reviewed journal,” Everson said during an interview with Progressive Grocer. “We welcome the scrutiny. If anything, the estimates are conservative, especially the incremental revenue figure of $6 billion.”

Scrutinizing the 34-page report, dense with statistics and modeling scenarios, is challenging and requires a degree of economic sophistication, however, Everson knows that, “there are people that live and breathe those statistics and in a peer reviewed journal I can promise you people will be examining every single calculation.”

“Instacart has been a catalyst for the U.S. grocery industry both before and during the pandemic,” Kulick said. “This analysis shows that, from its inception, Instacart has driven significant increases in U.S. grocery employment and revenue, and that during the COVID-19 pandemic, these effects have become even more pronounced. This ‘Instacart Effect’—the causal relationship between Instacart’s growth and the growth of the grocery industry—is a national phenomenon benefitting retailers, workers, consumers and local economies.”

The findings comes as Instacart looks to further insulate itself from criticism of its business model and reliance on independent contractors head of a long-rumored public stock offering during which regulatory risk is certain to be on the minds of investors.

“Due to both the rapid expansion of Instacart and the potential for policy makers to enact regulatory changes at the local, state, or national level that may restrict or impair the operations of grocery delivery platforms, it is crucial to understand how Instacart affects grocery workers and the overall grocery industry,” is how Kulick explained the need for the study in an executive summary. “Thus, this study utilizes a series of rigorous statistical models to evaluate the relationship between Instacart adoption and economic outcomes in the U.S. retail grocery industry.”

The rigor was applied by exploring: whether the positive relationship between Instacart adoption and economic growth in the grocery industry found in previous research for four states extends to all 50 states; whether the surge in Instacart usage associated with the COVID-19 pandemic led directly to increased grocery employment and output; and whether Instacart has had any impact on grocery workers’ wages.