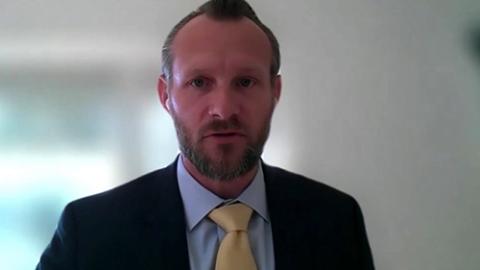 Michael Needler Jr., a National Grocers Association (NGA) member and CEO of Fresh Encounter Inc., which operates almost 100 grocery stores in Ohio, Indiana, Kentucky and Florida, testified before the Senate Judiciary Subcommittee on Competition Policy, Antitrust and Consumer Rights on the impact of increased consolidation and buyer power in the marketplace. During the hearing, “Examining the Competitive Impact of the Proposed Kroger-Albertsons Transaction,” Needler offered the independent grocer perspective on competition in the grocery sector and the potential effect of the Kroger-Albertsons merger.

“Our view is this: America’s grocery sector is getting less competitive from increasing concentration and unchecked buyer power due to a lack of enforcement of the Robinson-Patman Act,” Needler, a third-generation grocer, said in his opening statement. “Let me clear: We are agnostic on this transaction. We are not afraid to compete against anyone, no matter how big. What we oppose is the lack of constraints on buyer power, which thwarts our ability to compete in the first place.”

According to NGA, growing consolidation has led to a small number of companies with unprecedented economic power over food processing, meat packing and retail. These companies are able to dictate terms from suppliers to provide lower prices and more favorable supply terms, special package offerings, and product availability, leaving independent grocers at a disadvantage.

“America’s independent grocers and wholesalers are the backbone of their communities, providing access to nutritious food, essential services, and local jobs,” noted Greg Ferrara, president and CEO of Washington, D.C.-based NGA, which represents more than 1,800 independent grocery retailers that account for nearly 9,000 store fronts across the country. “In towns across the nation, independent grocers strive to compete on price, quality, service, convenience and product variety. However, lack of antitrust enforcement has allowed for the creation of a new generation of power buyers, and enhanced levels of concentration in the grocery retailing marketplace. Without enforcement of antitrust laws like the Robinson-Patman Act, power buyers will continue to engage in this cycle of anticompetitive behavior, harming competition within the industry and consumers.”

Added Ferrara, “In addition to enforcing the Robinson-Patman Act, we strongly urge policymakers on Capitol Hill and at the FTC to rigorously examine the proposed divestitures of this merger to preserve competition in local marketplaces.”

Indies weren’t the only ones in D.C. to discuss the pending merger: Kroger Co. CEO Rodney McMullen and Albertsons CEO Vivek Sankaran were also scheduled to testify before the antitrust panel of the Senate Judiciary Committee.

Earlier this year, NGA submitted comments to the Federal Trade Commission (FTC) and the Department of Justice (DOJ) encouraging the agency to curb anticompetitive practices arising from mergers of supermarket operators. The comments were submitted as part of the FTC and DOJ’s process of seeking stakeholder input in revising guidelines for merger enforcement.

Needler himself testified this past January in front of the Senate Judiciary Committee’s Subcommittee on Antitrust, Commercial and Administrative Law on the adverse effect of food supply chain consolidation on independent grocers.