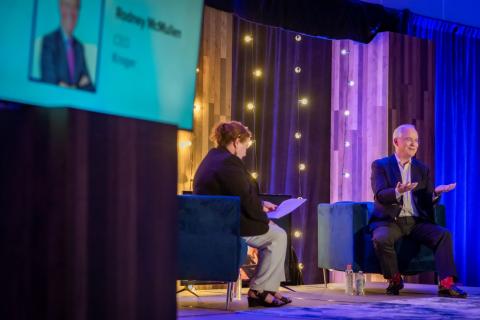 In a conversation spanning his early career in the grocery industry, e-commerce, buying a farm, the impending merger with The Albertsons Cos., and much more, The Kroger Co. CEO Rodney McMullen took time to speak with Progressive Grocer Editor-in-Chief Gina Acosta during this week’s Grocery Leaders Executive Forum at Grocery Industry Week in Orlando, Fla.

In sharing the background behind his company’s plans to merge with Albertsons, McMullen explained that Kroger had already begun work from a Federal Trade Commission (FTC) point of view when Albertsons announced its strategic review in February. “Literally, working store by store in terms of overlap and understanding from an FTC standpoint, what the likelihood was of bringing the companies together,” he said.

The Kroger executive believes Albertsons has done a good job of taking various groups of assets and making them into great retail stores and supermarkets while also prioritizing serving its communities. The grocer has also created a sense of ownership at the local level and made multiple pieces into a seamless company that performed incredibly well amid the pandemic and continues to gain market share, he said.

McMullen also explained that he prefers the term “merge” to the idea of an “acquisition” because both companies have something to offer the other.

“You’ll never hear me use the word acquire. To me, it’s about merging and bringing out the best of both companies,” McMullen said. “As long as we’re humble enough, I guarantee you there are a lot of things that Albertsons does better than us. Hopefully we’ll find some things that we’re better at, as well. Together we can create something that neither party can do individually.”

For Albertsons’ part, McMullen believes the grocer does extremely well with its fleet of 40,000- to 50,000-square-foot stores, and also has private label success in complementary categories. Shared synergies are something that attracted Kroger to Albertsons from the beginning.

“One of the things that appealed to us so much is that, if you look at the Albertsons values, they may use different words, but they’re exactly the same,” he explained. “You look at purpose, it’s exactly the same. We’re both so incredibly focused on customers and associates and community, and it made us really excited about the opportunity.”

Last month, Kroger said it will merge with Albertsons for $34.10 a share, a total enterprise value of approximately $24.6 billion. The merged company would span a national supermarket footprint of nearly 5,000 stores reaching 85 million households in 48 states.