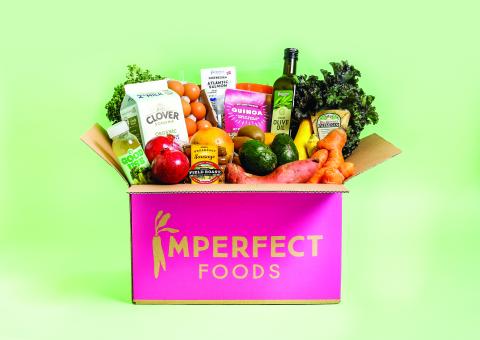 E-grocer Imperfect Foods is now a Certified B Corporation, thanks to the retailer’s commitment to sustainability, transparency and accountability. Founded in 2015 with the aim of eliminating the 35% of food that ends up going to waste in the United States annually, Imperfect Foods started out by sourcing “ugly” and surplus produce that didn’t meet conventional grocery store standards, and delivering it directly to customers’ doors. Over the past six years, the company has rescued more than 150 million pounds of food from farms and producers across the country. It’s now a full-service online grocer offering private label items, with 25 million boxes delivered to date and on track to rescue 50 million-plus pounds of food this year.

Imperfect Foods has recently revealed a plan to become a net-zero carbon operation by 2030— 10 years earlier than major retailers and 20 years before the Paris Climate Agreement deadline. In 2020 alone, the retailer’s last-mile delivery emitted 12,800 fewer tons of carbon dioxide than trips to traditional grocery stores, which Imperfect foods likened to taking 2,800 cars off the road for a year; purchased 7,921 tons of post-consumer recycled packaging; and saved 52,263,090 pounds of food from lesser outcomes.

“Since day one, we’ve been on a mission to fix our country’s broken food system, from how we source our products, to the way we package and deliver orders, and how we’re driving access within local communities,” said Maddy Rotman, head of sustainability at San Francisco-based Imperfect Foods. “We’re honored to have this stamp of approval and to pave the way for the future of grocery, to show that you can be sustainable, accessible and successful.”

In addition to its environmental efforts, the company is working to boost food access, offering a Reduced-Cost Box Program for qualifying customers. So far, the brand has delivered more than 475,000 boxes through the program. Through its last-mile delivery, Imperfect Foods is also able to service communities that may lack access to traditional grocery stores.

As it sees its fifth year of triple-digit growth, Imperfect Foods joins the 4,000 companies in 77 countries across 153 industries to achieve B Corp certification. This certification holds businesses to a higher standard of social and environmental responsibility, legal accountability and public transparency to balance both profit and purpose. Other retailers to earn the certification are fellow e-grocer Thrive Market and organic food purveyor Erewhon, both based in Los Angeles.

“We are thrilled to welcome Imperfect Foods to our growing community of B Corporations who align with our mission to redefine success in business in order to balance both profit and purpose,” said Lindsey Wilson, business development manager for Berwyn, Pa.-based B Lab US/Canada. “Recognition as a certified B Corp allows Imperfect Foods to continue their mission of reimagining grocery for a less wasteful food system, and affirms their role as a leader in the industry. We are looking forward to seeing Imperfect Foods’ continued investment in our planet's future expand with this new achievement.”