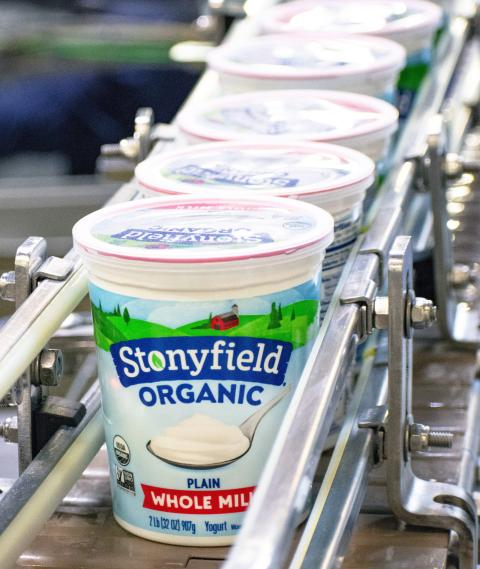 How acute is the plight of dairy farmers in the Northeast?  The situation was enough for Gary Hirshberg, co-founder and former CEO of Londonderry, N.H.-based Stonyfield Farm Inc., to return to the trenches.

Hirshberg, whose fun title has been “chief organic optimist,” wanted to ensure that the glass of milk is indeed half full for the remaining dairy farmers in his part of the world.

“I’d been taking a step back, but this is a national crisis more than a trend,” he explained. “What called me to action was the fact that we had never before had a situation in which we are suddenly without 135 farms.”

When he was growing up in the 1960s and 70s, there were 4,000 family dairy farms in his home state of New Hampshire, a number that dwindled to 1,000 when he started Stonyfield in 1983, and has recently dropped to close to a hundred.  The more recent problem stems from the fact that the contracts of 135 regional milk suppliers were terminated by two major food companies, Danone North America-owned Horizon and Maple Hill Creamery.

The losses are attributed to cancelled contracts and to larger operations that have continually siphoned business away from smaller family farmers. Other factors compounded the issue, like macroeconomic conditions and fallout from issues like the pandemic and labor shortages.

Stonyfield and its co-founder have stepped into to stanch some of the proverbial bleeding. They launched Northeast Organic Family Farmer Partnership (NOFFP), a group that aims to boost demand for organic milk produced by local brands. NOFFP has engaged several independent grocers and food cooperatives to become official retail partners, such as Roots Market, in  Olney, Md.; Buffalo Mountain Food Co-Op, in Hardwick, Vt.; and the New Morning Country Store, in Woodbury, Conn., among at least three dozen others.

Also part of Northeast Dairy Task Force, Stonyfield has been working with several of the recently dropped dairy farms to provide the company with milk for its organic products.  To bring these dairies on board, the company expanded processing capacities at its facility in Londonderry.

“I have my own personal commitment to organic, but from the farmer’s point of view, organic has been a lifeline for their operations,” Hirshberg said. “At this point, I can say confidently that of the 135, roughly 110 of them have gotten some kind of solution.”

He underscored the important role that grocers can play in helping shore up local farmers while providing consumers with products that meet their own demands for quality, sustainability and health and wellness. “It’s yet another opportunity  to make consumers, retailers and foodservice operators aware that without our support, these farmers won’t exist,” he noted. “The whole ecosystem must be engaged.”

Stonyfield is collaborating with retailers to get the message across. “We went and raised money to fund in-store activation at the point of purchase with things like signage, demos, fliers and efforts to educate retail clerks,” Hirshberg explained. “We also have a partnership seal that we like to get out there.”

On another level, Hirshberg and the company he helped create are seeking formal partnerships to save family dairy farms. Stonyfield recently revealed that global foodservice suppler Sodexo has committed to doubling or tripling its purchase of brands that come from local organic dairies. Also, Stonyfield is currently engaging in discussions with a major grocer in the region to sign on as a similar partner, according to Hirshberg.

Although the challenges faced by small farmers are immediate and organic products are more expensive, Hirshberg said that he has some reasons to back up his optimist title. “There are very clear demographics showing that under-35 consumers, particularly after COVID, are far more inclined towards organic, and not just for health reasons,” he said. “It’s getting better known that organic has clear climate advantages, too.”

In addition to support of organic products by younger and future consumers, Hirshberg is heartened by the broader recognition of the perils faced by family farmers. Other creameries and companies in different parts of the country are interested in Stonyfield’s efforts, he noted.

“There is a growing national awareness of this,” Hirshberg affirmed. “Farmers in every part of the country need to be supported.”