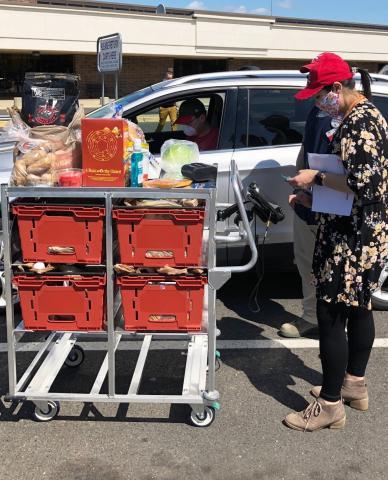 DeCA may be expanding its services to add home delivery in addition to curbside pickup through its Click2Go program.

Military families may have more access to home grocery delivery this year. The Defense Commissary Agency (DeCA) is said to be piloting a delivery program at eight sites in the United States.

According to a report published on Military.com, the new delivery option is an expansion of DeCA's current curbside pickup service. Tentative pilot sites include U.S. Marine, Naval and Air Force installations in California, Florida, Illinois, North Carolina, Virginia and Washington; delivery would be tested to housing locations within a 20-mile radius.

DeCA participants in those areas would be able to place orders through the organization’s current Click2Go system. Orders would be fulfilled at the commissary and delivered through a contractor, Military.com reports, citing a published preliminary contract solicitation.

When asked by Military.com to confirm the program, a DeCA spokesperson declined to comment.

This week, DeCA did announce promotions for the Feb. 13 Big Game between the Los Angeles Rams and the Cincinnati Bengals. DeCA is partnering with vendors, suppliers and brokers to offer deals on a variety of products, including 12-packs of soda, chicken, Goya beans, Wholly Guacamole!, Del Monte items and more. “It’s no coincidence that military shoppers traditionally max out their benefit to prepare for their big game menus,” said Marine Command Sgt. Maj. Michael R. Saucedo. “I cannot tell you who I want to win on Feb. 13, but I’ll say this: We are all winners if we shop the commissary and save big on all the snacks, drinks and meal ingredients for our game-day menus.”

DeCA operates a worldwide chain of commissaries providing groceries to military personnel, retirees and their families. Commissaries provide a military benefit with heavily discounted prices that include a 5% surcharge to covers the costs of building new commissaries and modernizing existing ones.