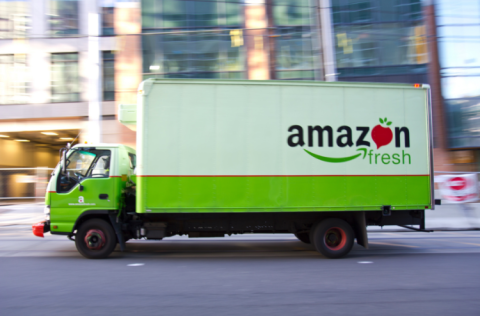 Amazon recently launched one- and two-hour grocery delivery of meat, seafood, eggs, produce and other fresh items in Tampa, Fla.

Amazon is planning to open the first of many stores in its anticipated new grocery chain, starting in Woodland Hills, Calif., in February.

According to Yahoo Finance, the first store will open at 6245 Topanga Canyon Blvd., in a former Toys “R” Us space in a strip mall. The store, about 2 miles from a Whole Foods Market store, is located in an affluent Los Angeles suburb.

The location choice, which Yahoo Finance recently took a photo of, shows Amazon’s desire to stay close to its core Prime members while experimenting with products Whole Foods can’t offer, according to Neil Saunders, managing director of retail at GlobalData, who spoke to Yahoo Finance.

“I think Amazon has probably looked to where its existing customers are and wanted to move into that area,” Saunders said. “So it's going to pull in a more affluent demographic, but it's going to be a much wider spread of customers than Whole Foods will probably attract.” The median household income in Woodland Hills is $85,000, and the town’s median home value is $829,800.

Amazon recently launched one- and two-hour grocery delivery of meat, seafood, eggs, produce and other fresh items in Tampa, Fla.