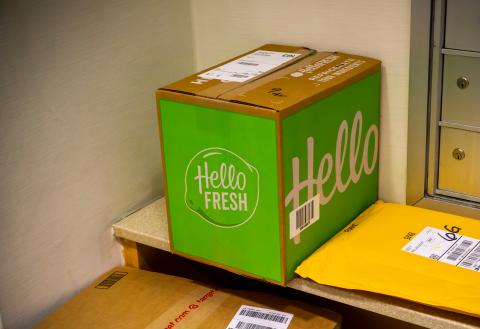 In its fourth quarter, HelloFresh delivered more than 111 million meals to 3.5 million customers across the United States.

Germany-based HelloFresh SE has ended 2021 with a strong performance, delivering almost 1 billion meals to customers in 17 markets across four continents. Revenue for the year amounted to approximately $6.6 billion, a surge from last year’s approximately $4.1 billion. The increase was driven by ongoing customer growth in both United States and international markets, with a total of 7.2 million active customers in the company’s fourth quarter, as well as continued high order rates and meals per order.

On an adjusted EBITDA basis, the meal kit company reached almost $584.5 million for fiscal 2021. HelloFresh maintained strong profitability levels, despite meaningful investments into its growth, including the acquisition of Youfoodz in Australia; launches in Norway, Italy and Japan; and a number of new production facilities across multiple geographies.

In its fourth quarter, the company delivered more than 111 million meals to 3.5 million customers across the United States, up by 38.7% and 34.9% year over year, respectively. This upward trajectory for convenient meals doesn’t show any signs of slowing down, as a recent Piplsay survey found that 45% of American subscribers plan to continue using meal kits.

HelloFresh initially revealed plans to expand into a new market segment, ready-to-eat meals, with its $177 million Factor acquisition in the United States in 2020. The acquisition marked the next step in HelloFresh’s growth plan to expand its total addressable market and tap into new customer segments. According to the company, over the past year, Factor has become the largest ready-to-eat meal company in the United States in terms of market share.

HelloFresh also said last year that it was expanding beyond dinner. The company at that time launched HelloFresh Market, a one-stop online store providing American customers with everyday items and quick meal solutions that customers can add onto their weekly orders.

"2021 has been another year of successful growth and expansion for HelloFresh. We delivered very meaningful growth across both segments, despite a tough benchmark, given that 2020 was an unprecedented year of lockdowns," said Dominik Richter, co-founder and CEO of HelloFresh. "Over the course of 2021, we have made significant progress in ramping up our production capacity and infrastructure globally, while launching Norway, Italy and Japan as new markets; bringing Green Chef as an additional brand to the U.K. market; extending our HelloFresh Market offering of high-quality curated add-ons to the U.S.; and acquiring Youfoodz in Australia. We are laying the foundations for reaching our mid-term targets and charging towards becoming the world’s leading integrated food solutions group.”

Looking forward, HelloFresh will continue strong investment in its long-term growth capabilities, most notably the ongoing build-out of its fulfillment infrastructure, and the strengthening of its tech and data platform. The company will also continue to pursue and scale new geographies and brands in line with its long-term growth strategy. HelloFresh expects revenue growth on a constant currency basis between 20% and 26%.

HelloFresh SE is based in Berlin, with U.S. offices in New York. The meal kit company is No. 75 on The PG 100, Progressive Grocer's 2021 list of the top retailers of food and consumables in North America.