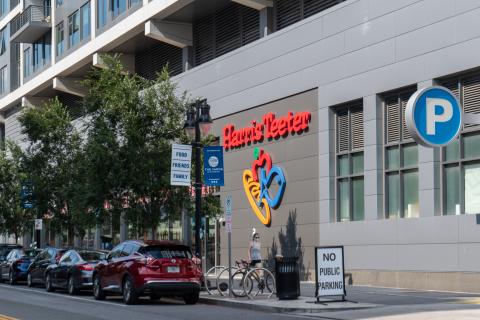 Harris Teeter, along with the USO, has thanked its shoppers and associates who donated during the 2021 Support Our Troops campaign.

Harris Teeter has donated $1.9 million to the United Service Organizations (USO), a military service organization that strengthens service members by keeping them connected to family, home and country. The donation was made possible through contributions from Harris Teeter’s shoppers and associates during the retailer’s annual Support Our Troops Round Up campaign held April 7-June 15.

All Harris Teeter locations hosted the in-store donation campaign, inviting shoppers to round up their transaction to the nearest whole dollar at checkout.

“The success of Harris Teeter’s Support Our Troops Round Up campaign is a direct reflection of the generosity of our valued associates and loyal shoppers,” said Danna Robinson, communication manager for Harris Teeter. “Through this generous donation, the USO can provide much-needed resources, programs and support for military service members and their families.”

The $1.9 million will be allocated to local USO chapters throughout the areas that Harris Teeter operates and brings the retailer’s total amount donated for the Washington, D.C.-based nonprofit to more than $11.2 million since the campaign’s inception in 2012.

“The USO is overwhelmed by the wonderful generosity demonstrated throughout this campaign,” said Jim Whaley, regional president, USO Southeast Region. “We are overjoyed and grateful for all the Harris Teeter associates and loyal shoppers who continuously show their support to the USO. We are proud to partner with this incredible organization which supports our brave service members, as well as their families.”

Stop & Shop is also raising money for the USO with its annual Support Our Service Men and Women fundraising campaign. Throughout July, customers can donate $1, $3 or $5 at checkout, in-store or online, or round up their total to the nearest dollar at self-checkout.

Matthews, N.C.-based Harris Teeter is a wholly owned subsidiary of The Kroger Co. Kroger employs nearly half a million associates who serve 9 million-plus customers daily through a seamless digital shopping experience and nearly 2,800 retail food stores under a variety of banners. The Cincinnati-based company is No. 3 on The PG 100, Progressive Grocer’s 2021 list of the top food and consumables retailers in North America. Ahold Delhaize USA, a division of Zaandam, Netherlands-based Ahold Delhaize, is the parent company for Ahold Delhaize’s U.S. companies, consisting of Food Lion, Giant Food, The Giant Co., Hannaford, and Stop & Shop. Operating more than 2,000 stores across 23 states, Ahold Delhaize USA is No. 10 on The PG 100.