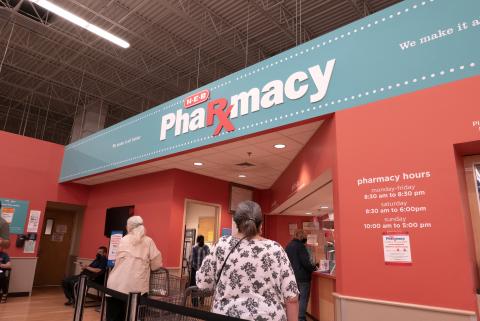 H-E-B has wrested the top spot from Wegmans in J.D. Power's ranking of top brick-and-mortar supermarket pharmacies, which Wegmans had previously led for the past three years.

Good Neighbor Pharmacy earned the highest score, 912, among brick-and-mortar chain drug store pharmacies for the fifth consecutive year, with Health Mart second, at 891, and Rite Aid Pharmacy third, at 866. In the mail-order segment, Humana Pharmacy ranked highest for the fourth year in a row, with a score of 906, while Kaiser Permanente Pharmacy came in second, with a score of 887, and Aetna Rx Home Delivery was in third place, with a score of 884.

The study also found that more than half — 51% — of retail pharmacy customers have used health-and-wellness services during the past year, up from 48% in 2020 and 43% in 2019. According to J.D. Power, overall satisfaction, net promoter scores (NPS) and average customer spend all increased significantly when pharmacy customers made use of health-and-wellness services, with overall satisfaction scores climbing 24 points (on a 1,000-point scale) and NPS growing by 10 points, while customers who used at least one health-and-wellness-oriented service provided by their retail pharmacy each spent an average of $5 more than those who didn’t use these services, $28 versus $23, respectively.

“It was not long ago that the major pharmacy chains, health care providers, health plans and consumers were all asking themselves whether or not people would ever feel comfortable receiving treatment in a retail setting,” noted James Beem, managing director of health care intelligence at Troy, Mich.-based J.D. Power, a global provider of consumer insights, advisory services, and data and analytics. “While we have been seeing consumer satisfaction with retail health services grow steadily, this year marks a significant turning point in which most customers are now using these services. The fact that this happened during a pandemic should send a clear signal that retail pharmacies are transforming health-and-wellness services in America.”

The U.S. Pharmacy Study, now in its 13th year, gauges customer satisfaction with brick-and-mortar and mail-order pharmacies. The 2021 study is based on responses from 12,646 pharmacy customers who filled a prescription during the three months before the survey period of September 2020 through May 2021.