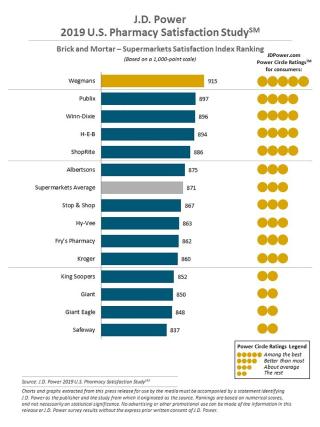 When it comes to customer satisfaction with brick-and-mortar supermarket pharmacies, Wegmans Food Markets once more ranked highest overall, with a score of 915, according to the “J.D. Power 2019 U.S. Pharmacy Study.” Publix Super Markets came in second, with a score of 897 (it was third last year), and Southeastern Grocers banner Winn-Dixie was a close third, with a score of 896, ousting H-E-B from the top three (it was fourth this year, with a score of 894).

What’s more, the annual study found that, despite the growing popularity of ecommerce, the U.S. pharmacy industry is still able to command high levels of customer satisfaction with both brick-and-mortar stores and mail-order providers like Humana Pharmacy, which ranked highest overall in this segment, with a score of 900, paced by Kaiser Permanente Pharmacy (886) and OptumRx (869).

“As technology companies promise to change the way Americans address their pharmacy needs, our data suggests that changing such entrenched behavior will be an uphill battle,” noted Greg Truex, managing director of health intelligence at Costa Mesa, Calif.-based J.D. Power. “Customers enjoy visiting their brick-and-mortar pharmacy, and they get a great deal of satisfaction from speaking directly with pharmacists. However, the potential for technology disruption is there. Although the frequency of use of digital solutions is low, early adopters are showing high levels of satisfaction.”

Findings of the 2019 study include the following:

The “U.S. Pharmacy Study,” now in its 11th year, gauges customer satisfaction with brick-and-mortar and mail-order pharmacies. This year’s study is based on responses from 12,059 pharmacy customers who filled a prescription during the three months prior to the survey period of May-June 2019.