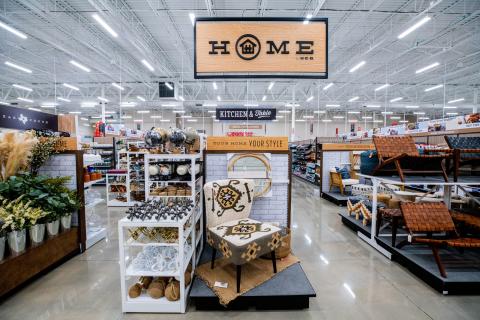 The New Braunfels store is the first location to have a Home by H-E-B department, featuring Haven + Key and Texas Proud collections.

Texas grocer H-E-B is touting a couple of department firsts at its newest store in New Braunfels. Not only does the store feature the company’s first two-story True Texas BBQ restaurant, but it is also the first location to introduce the Home by H-E-B department.

This new store replaces an existing location in New Braunfels, which closed during the last week of April. The 122,000-square-feet store, which is situated on the same property on Walnut Ave., is about 40,000 square feet larger than the original.

“We are thrilled to bring a new H-E-B store to New Braunfels, which introduces our customers to some exciting features and departments that are firsts for our company,” said Julie Bedingfield, H-E-B’s public affairs manager.

H-E-B plans to open more Home by H-E-B departments inside additional store locations throughout the year.

The first two-story True Texas BBQ, H-E-B’s barbecue restaurant that was named best barbecue chain in Texas by Texas Monthly and a top barbecue chain in the nation by Thrillist, touts indoor seating on both levels at the New Braunfels store. 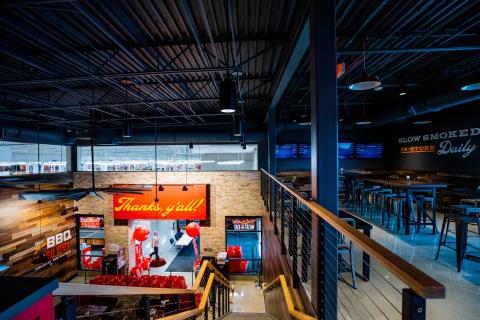 Additionally, the new store’s design elements also complement the look and feel of the surrounding neighborhood and the New Braunfels community.H-E-B operates three stores in the area.

“With an enhanced in-store experience and commitment to top-quality service and selection, this new store is tailored to serve the needs of this growing community and provide our customers with the best we have to offer,” said Bedingfield.

In celebration of the grand opening, H-E-B donated $10,000 each to McKenna Children’s Museum and Communities in Schools South Central Texas.

Meanwhile, H-E-B has been busy breaking ground for additional stores. The company recently began construction on a site in West Austin that used to be home to the locally beloved Nutty Brown Café & Amphitheatre. The 103,000-square-foot store will feature memorabilia and bricks from the original café and music venue and is expected to be complete in spring 2023. H-E-B also recently broke ground on a new 118,000-square-foot store in McKinney at the northeast corner of Custer Road and Eldorado Parkway. It's slated to open in late 2023.

With approximately 400 stores in Texas and Mexico, San Antonio-based H-E-B is No. 13 on The PG 100, Progressive Grocer’s 2021 list of the top food and consumables retailers in North America.