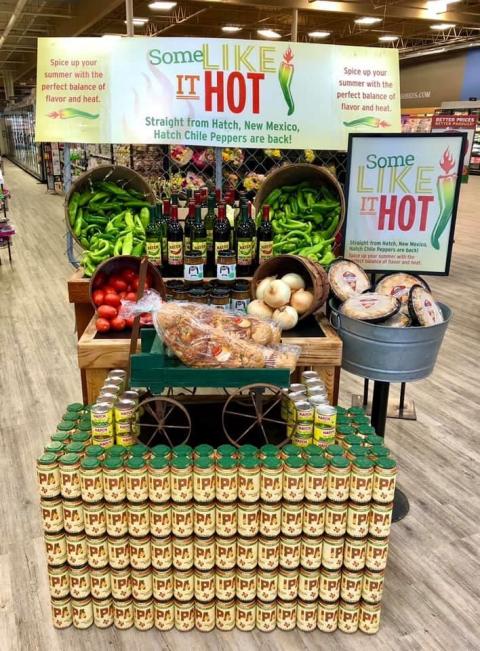 The dog days of August may be coming, but many grocers are feeling "chile." With Hatch Chile season arriving soon, promotions centered on this popular type of pepper are heating up.

Hatch Chile events are a big deal in New Mexico, where the peppers have been traditionally grown in the Rio Grande agricultural area known for its strong daylight and cool nights. One of the biggest and most well-known events is the Hatch Chile Festival in Hatch, N.M., planned for Labor Day weekend.

As Hatch Chiles gain a following as a foodstuff over the years, retailers in other states have started seasonal promotions. The Central Market chain is planning to hold its 26th annual Hatch Chile Festival from August 2-24, with in-store displays and Hatch Chile roasts planned for stores across Texas. The New Mexico Tourism Department certified Central Market’s Hatch Chile Festival — also referred to by the grocer as its “Hatch-iversary” — as the most authentic Hatch festival outside of New Mexico.

Heinen's may be in the Midwest, but that retailer is also ramping up for its anticipated Hatch happenings. Heinen's stores in Ohio and Illinois will host Hatch Chile roastings in August from 11 a.m. to 4 p.m. on select Fridays and Saturdays and also share recipes and information on the zesty vegetables.

In California, Kroger’s Ralph's banner and its Hatch Chile supplier Frieda’s are getting ready for annual Hatch Chile roasts in several Ralph’s locations during August and early September, including the Los Angeles area. Ralph’s sells Hatch Chiles in pouch and bulk form, with mild, medium and hot flavor options.

Last year, Brookshire Grocery Co. won a Creative Choice Award from the National Grocers Association for its annual Hatch Chile campaign. The retailer expanded the promotion to more Brookshire’s, Super 1 Foods and Fresh by Brookshire’s locations in 2020, with a theme of “Some Like It Hot.” The program included special displays, signage, roasting events and a spotlight on items made with Hatch Chiles, including a bacon cheddar hatch burger patty in the meat case and a special craft beer in the adult beverage section, among others.

The Kroger Co. serves 11 million-plus customers daily through a digital shopping experience and almost 2,800 retail food stores under a variety of banner names. The company is No. 3 on The PG 100, Progressive Grocer’s 2021 list of the top food and consumables retailers in North America. Brookshire Grocery Co. is a regional family-owned grocery business operating more than 180 stores in Texas, Louisiana and Arkansas. Its banners include Brookshire’s, Super 1 Foods, FRESH by Brookshire’s and Spring Market. The company is No. 62 on The PG 100.