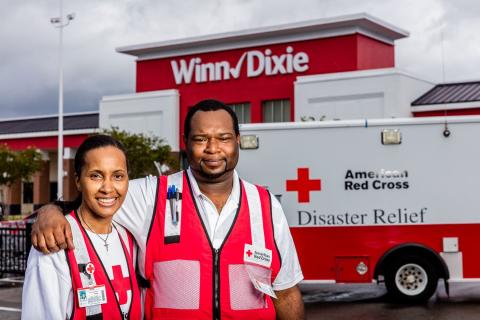 The food retail industry is supporting its neighbors in Louisiana and along the Gulf Coast as they recover from the recent devastation of Hurricane Ida. The Category 4 storm made landfall in southeast Louisiana on Aug. 29, the 16th anniversary of Hurricane Katrina.

With power out, roads blocked, and services like water and sewerage disrupted in many places, The New York Times is reporting that it may not be safe for Ida evacuees to return for days.

To support the disaster relief efforts in affected areas, Publix Super Markets Charities is donating a total of $250,000 to the American Red Cross and United Way.

In addition, Publix is conducting a register donation campaign allowing customers and associates to support relief. Shoppers may make a donation in any amount having it added to their grocery total at checkout. One hundred percent of donated funds will go to the American Red Cross to support its response efforts. The end date for the campaign will be determined based on customer response.

“Hurricane Ida caused destructive storms and flooding throughout the Southeast,” said Publix Director of Community Relations Dwaine Stevens. “We’re honored to offer our customers and associates a way to help those affected by the severe weather that has devastated so many areas over the last few days.”

“At Southeastern Grocers, we believe it is our responsibility to lift up and support our neighbors and associates as they begin to rebuild their lives after this devastating storm,” said Anthony Hucker, president and CEO of Southeastern Grocers. “The road to recovery will be long and challenging, but as we saw with Hurricane Katrina 16 years ago, we know the people and communities of Louisiana and along the Gulf Coast are strong and resilient. Together, we will emerge from Hurricane Ida’s destruction stronger than ever.”

Earlier this year, the Southeastern Grocers' charity arm donated $250,000 to the Red Cross in preparation of an active hurricane season and, with the help of devoted associates and customers, the grocer has donated more than $11 million to support the organization’s disaster relief efforts over the past five decades.

Donations to the Washington D.C.-based American Red Cross enable the national nonprofit organization to prepare for, respond to and help people recover from, disasters big and small.

Privately owned and operated by its more than 225,000 employees, Lakeland, Fla.-based Publix has  more than 1,200 stores in Florida, Georgia, Alabama, Tennessee, South Carolina, North Carolina and Virginia. The company is No. 11 on The PG 100, Progressive Grocer’s 2021 list of the top food and consumables retailers in North America.Jacksonville, Fla.-based Southeastern Grocers is one of the largest conventional supermarket companies in the United States, with grocery stores, liquor stores and in-store pharmacies serving communities throughout Alabama, Florida, Georgia, Louisiana, Mississippi, North Carolina and South Carolina. The company is No. 43 on The PG 100.