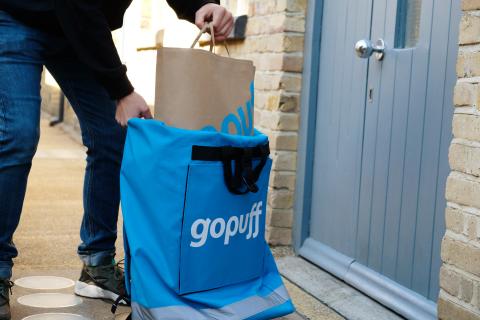 The launch of Gopuff in the United Kingdom was facilitated by the company’s strategic acquisitions of last-mile solutions Fancy and Dija earlier this year.

Instant-needs platform Gopuff has launched across the United Kingdom, with operations in Birmingham, Bristol, Cardiff, Leeds, Liverpool, London, Manchester, Newcastle, Nottingham and Sheffield, providing millions of U.K. customers with access to a wide assortment of products, including groceries, in mere minutes. Having ramped up its international and domestic growth over the past several months, Gopuff aims to be in 33 U.K. cities by mid-2022.

The launch of Gopuff in the United Kingdom was facilitated by the company’s strategic acquisitions of last-mile solutions Fancy and Dija earlier this year. The official U.K. launch marks the transition of both Fancy and Dija to the Gopuff app, as well as the company’s first international market.

“When looking at expanding into Europe, we were extremely attracted to the similar models, infrastructure, loyal customer bases and talent we saw in both Dija and Fancy,” noted Rafael IIishayev, co-founder and co-CEO of Philadelphia-based Gopuff with Yakir Gola. “By combining Gopuff’s technology, scale and deep experience leveraging existing physical infrastructure, with the local market knowledge and entrepreneurial spirit of the Fancy and Dija teams, we can bring a game-changing and unparalleled experience to U.K. customers.”

According to the company, Gopuff’s business model is a great fit for the U.K. market because of the number of densely populated cities and higher market demand for instant-needs services. The company’s total addressable market in this space is expected to reach $10 trillion worldwide, spurred by both category (depth and breadth) and international expansion. Founded in 2013, Gopuff currently operates more than 500 micro-fulfillment centers, BevMo! and liquor barn stores across North America and Europe.

“Over the last eight years, we have continued to define the instant-needs category and shown significant and sustainable growth across the U.S.,” said Gola. “Our goal was always to be the world’s go-to solution for everyday needs, and making Gopuff available in the U.K. is just the start of our international expansion. The well-established relationships, expertise and infrastructure Fancy and Dija provide us, along with strong local ties in all the communities we’re now operating in, will be invaluable. We aim to be the leader in bringing our British customers fast and affordable delivery of our diverse assortment of products.”

With this end-to-end control of the supply chain, Gopuff makes its margin on products, and U.K. customers pay a flat fee of £1.79 per order, with orders delivered quickly, thanks to the company’s micro-fulfillment centers in  every market it serves. The service is available 24/7 in many areas and until late everywhere else to bring customers what they need, when they need it most.Local suppliers and sole traders are able to boost their customer base via Gopuff’s owned distribution channels.

Gopuff is continuing to grow its presence and investment across Europe, having set up more than 30 micro-fulfillment centers there. It also has more than 1,000 employees in the region — more than two-thirds of them in the United Kingdom — serving 25-plus cities.

With a current valuation of $15 billion, Gopuff received $1 billion in funding earlier this year to accelerate its strategic priorities, including continued geographic expansion, the recruitment of top-tier local talent and investment in technology. Gopuff is also focused on enhancing the sustainability of its operations, deploying a majority-electric fleet in London, with plans to expand use of such vehicles as the company continues to grow in the region.

At an event marking Gopuff's launch in New York, Daniel Folkman, the company’s SVP of business, told Progressive Grocer of the imminent rollout to London, with Paris shortly to follow, while noting that domestically, Gopuff had its eye on the San Francisco and Los Angeles markets.