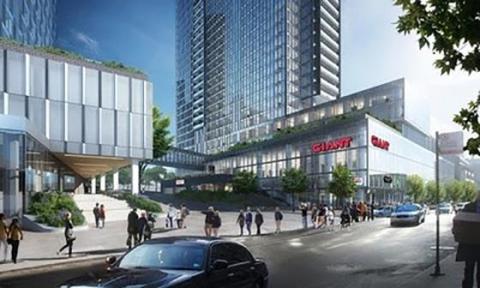 In addition to Giant's $114 million capital investment in Pennsylvania over the next 18 months, the grocer will open an urban flagship store (similar to this rendering) in Philadelphia in 2020.

Giant Food Stores has announced big plans in Pennsylvania over the next 18 months, to the tune of a $114 million capital investment. These plans include a new ecommerce fulfillment center, two new stores and 35 remodels.

“We’re doubling down on growth and innovation for our customers, building on the incredible momentum of 2019, and continuing to invest in our great commonwealth,” said Nicholas Bertram, president of Giant Food Stores. “The accelerated growth of Giant Direct has set the stage for additional investment opportunities that extend our ecommerce geographic reach. At the same time, our Giant Heirloom Market format has enabled us to reach an entirely new demographic in Philadelphia.”

Giant's new fulfillment center — to support its ecommerce brand Giant Direct — will be located in Philadelphia. The existing 124,000-square-foot facility will be completely renovated to streamline home delivery and in-store pickup for online shoppers.

Giant will partner with fellow Ahold Delhaize USA company Peapod Digital Labs to develop the facility, and it's expected to create over 200 new jobs.

The grocer will open a new 52,000-square-foot Giant store in the company's home market of Harrisburg, Pa., which will bring approximately 150 jobs to the community. Construction on the Swatara Township store in Dauphin County begins early this year.

In Monroe County, a 66,000-square-foot Giant store set to open in 2021 in Pocono Summit, Pa. This store will employee approximately 200 team members.

“Investing in our store base remains a priority for us as we work to enhance the in-store experience for the millions of customers we serve each week,” added Bertram. “From our development projects in Philadelphia to our new stores in Pocono Summit and Harrisburg or our remodels across the state, our goal is to provide the very best, most personalized shopping through innovation, technology and a refreshed design.”