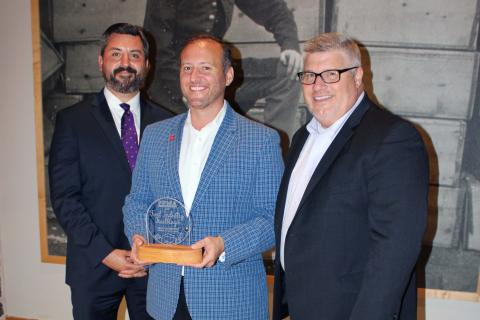 L-R: PFMA President and CEO Alex Baloga, The Grocery Co. President Nicholas Bertram, and Tom Cormier, chair of the PFMA board of directors and manager of government affairs for Ahold Delhaize USA.

During its annual conference dinner in Gettysburg, Pa., this week, the Pennsylvania Food Merchants Association (PFMA) presented Nicholas Bertram, president of The Giant Co., with the Food Industry Trailblazer Award.

“Nick learned to never put himself above any person or any work,” noted Tom Cormier, chair of the PFMA board of directors and manager of government affairs for Ahold Delhaize USA, the Giant Co.'s parent. “He has developed a unique culture at The Giant Co. that values and celebrates every member of its 35,000-person team.”

Bertram began his career in retail more than two decades ago at JCPenney. He moved to Walmart as a part-time stocker. During his 12 years with Walmart, he rose to take on leadership roles in store operations, human resources and innovation. Bertram joined Jewel-Osco in Chicago as SVP of retail, and then in 2013 assumed executive roles at Ahold Delhaize, the parent company of The Giant Co. In 2017, Bertram became president of The Giant Co.

“Nick is an exceptional leader at The Giant Co. and in the food retail industry,” said Alex Baloga, president and CEO of PFMA. “We’re thrilled to honor his achievements. He continues to pave the way with new innovations in his work, all with a focus on team and family.”

Bertram’s achievements include rolling out Marty the robot, which uses image-capturing technology to report spills, debris and other potential hazards to store associates; accelerating the company’s e-commerce business; introducing a successful two-level urban format unique to Philadelphia; and debuting the new brand platform, For Today’s Table, which highlights how sharing a meal connects families and creates stronger communities.

He earned a BBA in marketing from Eastern Kentucky University and an MBA in global management from the University of Phoenix, in addition to completing post-graduate programs at Northwestern’s Kellogg School of Management, Harvard and The Wharton School.

With more than 35,000 associates supporting nearly 190 stores, 132 pharmacies, 107 fuel stations, and 150-plus online pickup hubs and grocery delivery service in hundreds of ZIP codes, The Giant Co., based in Carlisle, Pa., encompasses the following banners: Giant, Martin's, Giant Heirloom Market, Giant Direct and Martin's Direct. Parent company Ahold Delhaize USA, a division of Zaandam, Netherlands-based Ahold Delhaize, is No. 10 on The PG 100, Progressive Grocer’s 2021 list of the top food and consumables retailers in the United States. Meijer, SpartanNash and Tops are Nos. 18, 39 and 66, respectively.