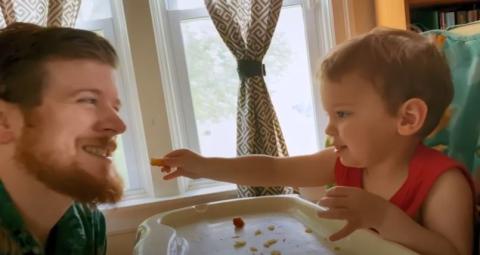 The Giant Co.'s new ad campaign shows the real-life activities of five families who shop at the grocer's stores.

As The Giant Co.continues to roll out its new brand platform, For Today’s Table, the grocer has launched a marketing campaign highlighting the stories of real people. The campaign features five real families, highlighting the food retailer’s commitment to authenticity.

“To really capture the essence of For Today’s Table, we wanted to create something that was authentic and relatable, and there was no better way to achieve that than by showcasing our real customers and their families,” noted Matt Simon, chief marketing officer of The Giant Co. “Our decision to move away from actors, scripts and staged scenes in favor of real stories from real people speaks directly to what today’s customers are seeking as they make decisions about where to shop and who they turn to when it comes to caring for their families; they want a real brand. It’s our hope that they’ll see themselves in these families and The Giant Co. as their partner in making life a little bit easier and helping them get back to what matters most.”

The campaign includes a version of the iconic song “Teach Your Children” by Crosby Stills Nash & Young, performed by Giant Co. associate Hannah Reese. The five families appearing in the ads are the Gorals, from Jamison, Pennsylvania; the Lys, from Lansdale, Pennsylvania; the Byrds, from Hagerstown, Maryland; the Butts, from Pennsburg, Pennsylvania; and the Esteps from Harrisonburg, Virginia, each of them actual Giant and Martin’s customers.

Each family was asked to film themselves over several weeks. The result was hours of footage capturing real-life experiences.

Two 30-second TV spots – one for Giant and one for Martin’s – are currently airing, along with digital and social elements. Additionally, a special extended version of the TV spot featuring additional scenes is available online.

“As we viewed the initial footage, any reservations we had immediately disappeared, as it was clear these families brought their stories to life in a way that a storyboard couldn’t ever do,” continued Simon. “The final product has exceeded our expectations in every way, and we are beyond excited to continue sharing the real stories of these families, which we think will really resonate with our customers.”

“We can’t plan for authenticity,” said Meredith Schwinder, creative director at Philadelphia-based Brownstein Group, The Giant Co.’s advertising agency of record, which developed the campaign. "In order to do this right, we had to hand over the cameras to actual customers. There was no script. There were no storyboards. We just set out to find five awesome families who were willing to let us into their worlds.As a result, the spot breaks through with genuine purpose that is true to Giant's new brand platform.”

Basedin Carlisle, Pennsylvania,The Giant Co.is an omnichannel retailer serving millions of customers across Pennsylvania, Maryland, Virginia and West Virginia. It has more than 33,000 associates supporting nearly 190 stores, 132 pharmacies, 105 fuel stations, and 125-plus online pickup hubs and grocery delivery service across hundreds of ZIP codes. The Giant Co. is a company ofAhold Delhaize USA, No. 11 on The PG 100, Progressive Grocer’s 2020 listof the top food and consumables retailers in North America.