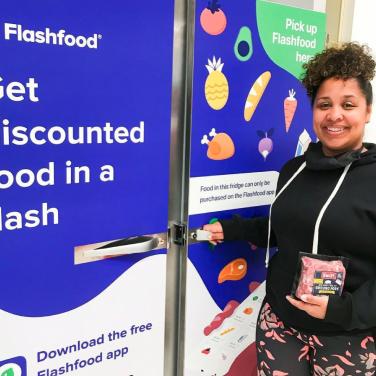 Customers can pick up their discounted items purchased through the app from the Flashfood zone located inside participating Giant or Martin’s stores.

Following a successful pilot first introduced in May 2020, The Giant Co. has plans to roll out the Flashfood app to all Giant and Martin’s stores. The Flashfood app allows shoppers to purchase fresh food, including produce, meat, deli and bakery products, nearing its best-before date at significantly reduced prices, while collectively reducing food waste.

Currently available at more than 30 stores, the rollout will place Flashfood at 170 participating Giant and Martin’s stores by this fall. Flashfood will first appear at stores in Pennsylvania's Bucks, Chester, Delaware, Montgomery and Philadelphia counties, with additional stores joining each month.

“Our ongoing partnership with Flashfood is two-fold, providing our customers with access to fresh foods while also helping to divert more than 250,000 pounds of additional food waste away from landfills,” said Glennis Harris, SVP of customer experience at The Giant Co. “We’ve received great feedback over the past year from our customers, many of whom have told us they can eat more fresh food because of the program. We can’t wait to offer this program at all of our stores and to all of our customers this summer.”

By downloading the Flashfood app, shoppers can browse deals from food retailers on fresh items like meat, produce boxes, bakery items and snacks that are nearing their best-before dates. Purchases are then made directly through the app and shoppers pick up their order the same day from the Flashfood zone located inside the participating Giant or Martin’s store.

“Food waste is a massive contributor to climate change, and we’re eager to tackle this complex issue in partnership with The Giant Co., a clear leader on sustainability,” said Josh Domingues, Toronto-based Flashfood's founder and CEO. “Flashfood is a triple win for our partners, the planet and, most importantly, people. By introducing Flashfood chainwide, The Giant Co. is making it possible for more than 100,000 families to access more fresh food this year.”

(Watch Progressive Grocer's on-demand webinar featuring Nick Bertram, president of The Giant Co., and Flashfood's Domingues as they discuss why sustainability is core to winning shoppers in 2021. Click here to view.)

The Flashfood app operates in more than 1,000 grocery locations throughout the United States and Canada. According to the company, it has diverted more than 22 million pounds of food, saved shoppers $70 million-plus and more affordably fed hundreds of thousands of families. In addition to The Giant Co., Flashfood is also working with Meijer, Tops Friendly Markets, SpartanNash and The Giant Co. sister banner Stop & Shop.

In an effort to further eliminate food waste, The Giant Co. also has recycling and donation programs in place. Last year alone, through its Meat the Needs program and in partnership with Feeding America, more than 5 million pounds of safe, consumable fresh food that would have otherwise gone unsold was frozen and donated to regional food bank partners.

With more than 35,000 associates supporting nearly 190 stores, 132 pharmacies, 107 fuel stations, and 150-plus online pickup hubs and grocery delivery service in hundreds of ZIP codes, The Giant Co. encompasses the following banners: Giant, Martin's, Giant Heirloom Market, Giant Direct and Martin's Direct. Parent company for The Giant Co. and Stop & Shop, Ahold Delhaize USA, a division of Zaandam, Netherlands-based Ahold Delhaize, is No. 10 on The PG 100, Progressive Grocer’s 2021 list of the top food and consumables retailers in the United States. Meijer, SpartanNash and Tops are Nos. 18, 39 and 66, respectively.